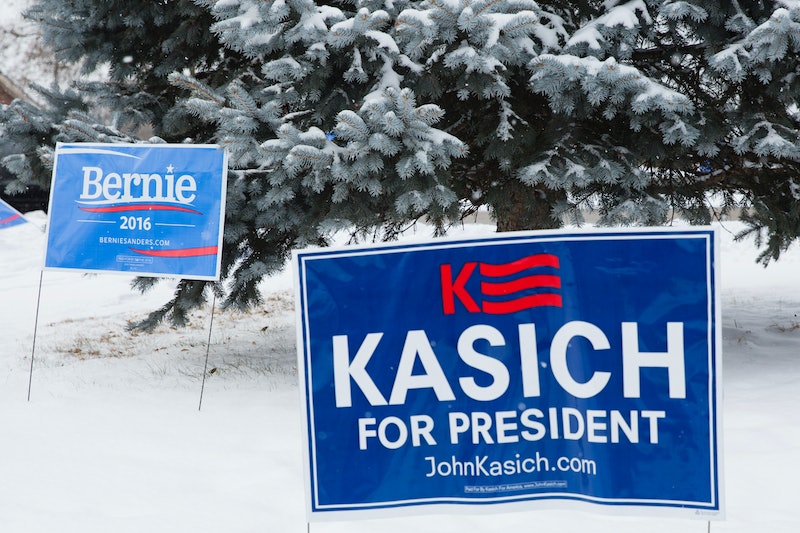 Tuesday is the night for primary-goers around the great state of New Hampshire, and the polls were open until 8:00 p.m. Eastern Standard Time. The polls have closed, and within 30 minutes, The Associated Press had called it. Donald Trump won for the GOP and Bernie Sanders won for the Democrats. It's sometimes difficult to determine who is leading on each side — see: the Iowa Caucus. Hillary Clinton and Bernie Sanders were in a dead tie for hours into the wee morning hours, when Clinton eked out the win by mere tenths of a percentage. The New Hampshire primary, unlike the Iowa Caucus, is crucial because it is the first in the United States, and the second opportunity for Americans to cast their primary votes. To determine the winner of the New Hampshire primary, all ballots must make their way through the counting system to assign delegates to candidates ahead of their party's respective national convention. In other words, it could ostensibly take awhile — or not. On Tuesday, it was a quick decision.

As far as voting goes, unlike in caucuses, primary voters can make their way to the polls at their leisure, casting their vote at any time during polling hours, typically from 7 a.m. to 8 p.m. ET. Although no conclusions are official until the opera singer sings, there are certainly some confident declarations early on in New Hampshire. MSNBC reported that Ohio governor John Kasich comes in second for the GOP, and Clinton obviously comes in second on the Dem's side.

Here's How The Timeline Looks

The AP is already announcing that the New Hampshire primary winners are Donald Trump on the Republican side and Bernie Sanders on the Democratic side, and only moments after polls in the state closed. Both came in second place in the Iowa caucuses. This now makes Trump the front-runner for the Republican Party. This also solidifies Sanders' legitimacy as a challenger for the Democratic nomination against Hillary Clinton.

The Secretary of State in New Hampshire guessed that voter turnout in Tuesday's presidential primary would prove higher than in 2008, according to his visits to various polling locations. He predicted several days ago that roughly 282,000 Republican ballots cast would be and 268,000 Democratic ballots cast, and more than 870,000 are registered voters. Polls close in 10 minutes, and had opened at 7:00 a.m., aside from a few areas where midnight voting was permitted.

About half of GOP voters in Tuesday's Republican primary decided which candidates are getting their votes by last week. Democrats say they knew earlier, according to the Edison Research for the AP and television networks.

Democrats are vying for 24 delegates in New Hampshire, and Republicans 23. Currently, Clinton has 385 delegates and Bernie Sanders has 29. It takes 2,382 delegates to win the Democratic nomination and 1,237 to win the Republican nomination.

Trump supporters are in the way of voters trying to vote. No big deal.

According to the Federal Election Commission, Conservative Solutions PAC — second-place in active Super PACs — is spending over $1.5 million on advertisements for Marco Rubio for South Carolina, primarily, and also Nevada.

Republican voters don't feel great about their candidates, according to an exit poll conducted by Edison Research for the AP and television networks. About 50 percent say they feel betrayed by GOP politicians. Ouch. Only two out of ten Democrats feel this way about their own side.

Exit polls by Edison Research for the AP and television networks say New Hampshire Republican voters are disappointed with the federal government. Nine out of ten on the Republican side expressed their letdown, while only one out of ten Democratic voters felt that way.

Donald Trump is hitting Ted Cruz hard in a new television advertisement that calls Cruz "the worst kind of Washington insider." The implication is that outsiders are preferable. It also calls Cruz a panderer of sorts, claiming he "talks from both sides of his mouth" on immigration and taking loans from Wall Street banks in 2012. The ad also attacked Cruz trickery in Iowa, that is, spreading false rumor that Ben Carson was leaving the race.

Donald Trump is greeting voters on their way to the polls at Webster School and Northwest Elementary School, posing for photos and shaking hands. He's even holding a party in Manchester for his supporters later in the evening.

Ted Cruz calls Donald Trump profane by explaining that his vulgar vocabulary is largely due to his lack of substance. Cruz told reporters:

Part of the reason that Donald engages in insults is because he can't discuss the substance. He can't defend his record. For example, a vote for Donald Trump is a vote for Obamacare.

Bernie Sanders is generating large crowds, not only at speaking events, but in his everyday campaign life. He just hopes it translates to voters:

If we have a large voter turnout I think we're going to do just fine.

Chris Christie is acting brashly toward reporters, not answering questions about whether his campaign will continue after Tuesday's GOP New Hampshire primary. His response:

I don't get into that stuff. Next!

Jeb Bush has some good polling numbers and large crowds. His current aim is to knock Donald Trump down a few pegs by campaigning on experience and Trump's lack of conservatism.