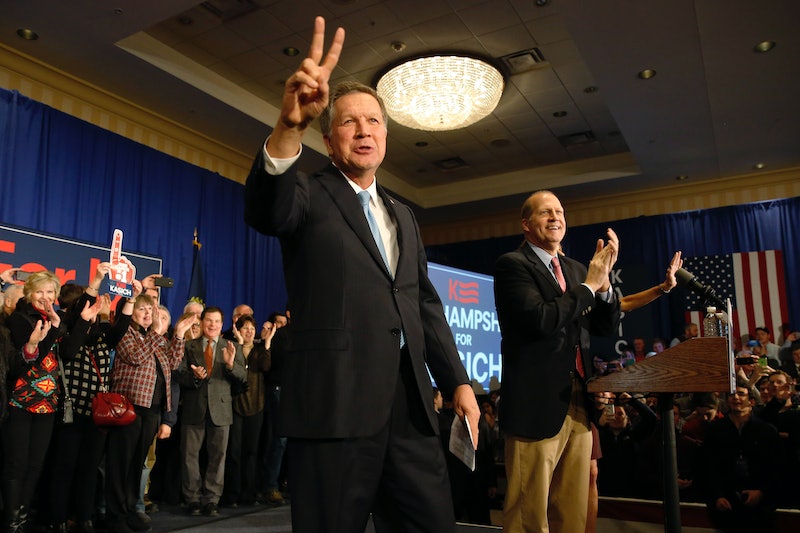 His usual approach is all hearts and flowers, but in his New Hampshire post-primary speech, John Kasich took a dig at Bernie Sanders that was totally ageist. Kasich largely avoided calling out his fellow Republicans, but did take a jab at the Democratic winner toward the end: "Bernie talked so long, I thought he was going to hit his 77th birthday."

Always one for fairness, Kasich also called out Hillary Clinton, saying that it was time for her to move on to South Carolina because it "ain't working here." I guess his focus on attacking Democratic candidates shouldn't be too surprising, considering how he told voters that he's a middle ground between Clinton and Sanders. Which, uh, OK?

Not only was the Bernie comment an unnecessary insult, but it was also inaccurate. Or, er, maybe. The Vermont senator is 74 years old, so Kasich either flubbed his actual age or actually thought that the speech was long enough to stretch through three entire years. And admittedly, the speech was long. I was thinking that as Sanders was giving his deservedly emphatic pep talk to supporters in New Hampshire. But it was not necessarily long enough to warrant an ageist attack on Sanders — because really, nothing should warrant that.

Why take the time to call out a candidate's age? Clearly, it hasn't been a hindrance to Sanders' campaign, which isn't being directly compared to Kasich's, even though it's clearly been more effective. The attack was aimed at making it seem as if Sanders is some feeble, tottering socialist who has managed to fool the American public into believing in him, which is clearly not the case. The joke was pretty "meh" at best, and degrading at the worst.

Save for the barbs aimed at Sanders and Clinton, Kasich's speech was, as CNN put it, pretty "Chicken Soup for the Soul." Kasich spoke of the need to slow down and listen to voters, and his mission, rising above attacking his opponents, to offer healing words to an ailing nation. That's all well and good, but maybe he could practice what he preaches and save the pettiness for the other GOP candidates. There was a brief shining moment in which he seemed to elevate himself, until he stooped to the very level he is trying to convince voters he will avoid.