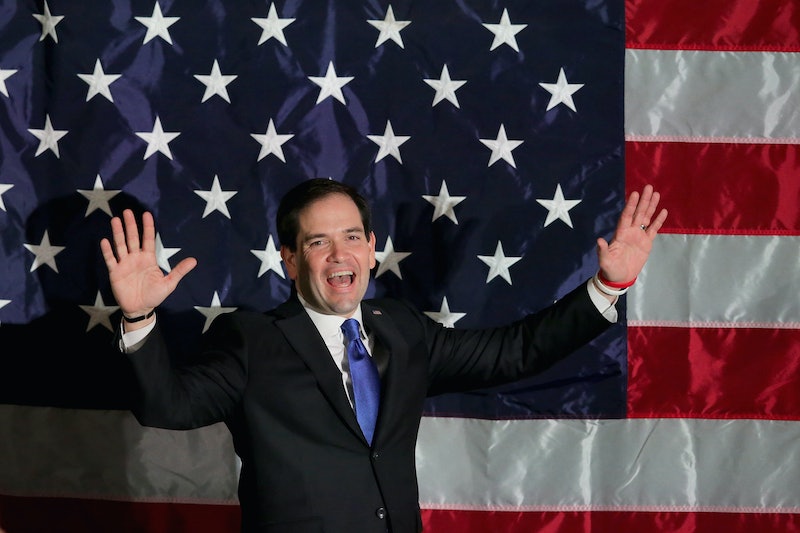 Just in case you thought the 2016 campaign couldn't get any weirder, there's now this: Robots are stalking Marco Rubio around New Hampshire. Blink, then read that last sentence again. Now center yourself in the reality of this election cycle, where that is a real, actual thing that's happening.

OK, let's back up for a minute. No, a gaggle of real droids aren't following the Florida senator on the campaign trail. The whole thing started when Rubio had a record-scratch moment during Saturday evening's GOP debate. On four — four! — separate occasions, he rolled out some variation of the line: "Let's dispel with this fiction that Barack Obama doesn't know what he's doing. He know exactly what he's doing." On the fourth attempt, New Jersey Gov. Chris Christie called him out on it, saying, "There it is! The memorized 25-second speech."

Now cue the robots. Starting on Sunday in Londonderry, New Hampshire, people dressed as robots began appearing at Rubio's campaign stops around the state to mock his speech style. The robots flanked Rubio gatherings on Tuesday leading up to the primary, and gained enough recognition to get a defensive shoutout from Fox News' Megyn Kelly, who praised the protesters' commitment.

Apparently, things have gotten tense, as the robots and Rubio supporters clashed on Tuesday. Imagine this fantastic scene: People clad in cardboard boxes taunting a man running for the highest office in the land, clashing with his fervent supporters. As you might think, it didn't go well. Outside of a Webster School polling station in Manchester, things appear to have come to a head:

In a video posted to YouTube, several Rubio supporters can be seen trying to block the robots with their campaign signs, with one ultimately grabbing a robot around the neck.

“Why do you have your hands on me?” the person in the upgraded robot suit says.

Another demonstrator, clad in a cardboard robot suit and wearing a silver colander as a helmet, appeared to have been knocked to the ground outside the school.

As if things on the ground aren't amazing enough, Twitter has also started to weigh in on RubioBots:

The whole RubioBot campaign was apparently started by American Bridge 21st Century, a progressive political action committee. It's unclear at this time if the RubioBots are working with the MarcoBot faction.