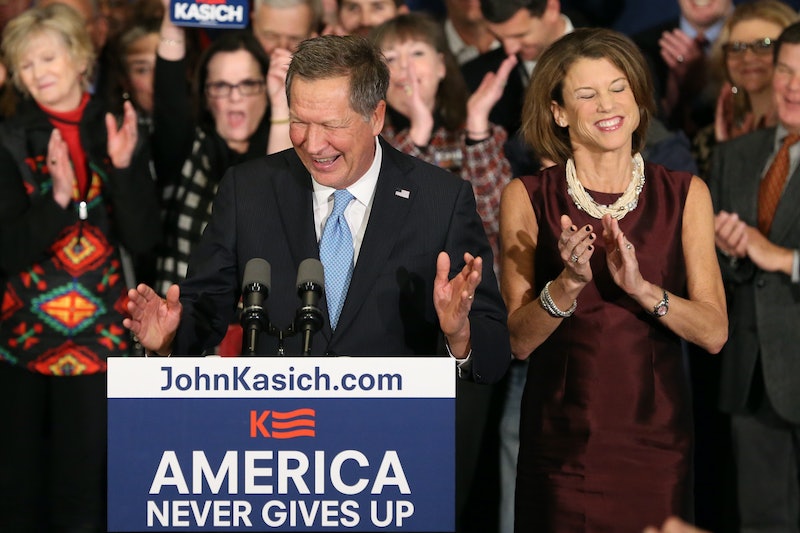 Ohio Gov. John Kasich celebrated a small win in New Hampshire Tuesday after coming in second to Republican frontrunner and businessman Donald Trump during the Granite State's primary. The impressive berth gave new wind to the Kasich campaign, and the Republican, who long suffered national name recognition, must have been feeling the moment because things got eerily familiar during his New Hampshire speech. As he thanks his New Hampshire supporters, Kasich began channeling Oprah, pointing at the crowd and repeated, "You made it happen, you made it happen, you made it happen!" much like Oprah did in an iconic Oprah Winfrey Show moment back in 2004.

During her yearly coveted "Oprah's Favorite Things" episode, Oprah gave away Pontiac G6s to the entire studio audience. Yup, that's 276 cars per person. For free. The classic TV moment, where Oprah excitedly yelled to her fans, "You get a car, you get a car, everybody gets a car!" is basically exactly what John Kasich accidentally replicated in his New Hampshire speech. And the famous Oprah car giveaway is actually parodied all the time, so Kasich's speech may have just ignited a new round of Internet memes (I hope).

Some of the other classic parodies of Oprah's car giveaway include the time she gave everyone in her studio audience a free nug?

Look how happy they are about that free weed!

And in April 2008, a YouTuber named Ryazilian made a music remix of the classic Oprah moment, which is actually hilariously interesting as a music mix:

John Kasich probably didn't realize how closely his "You made it happen" moment resembled Oprah's "You get a car." But maybe his voters will respond with a "You get a vote, you get a vote!" in the next primary in South Carolina on Feb. 20.