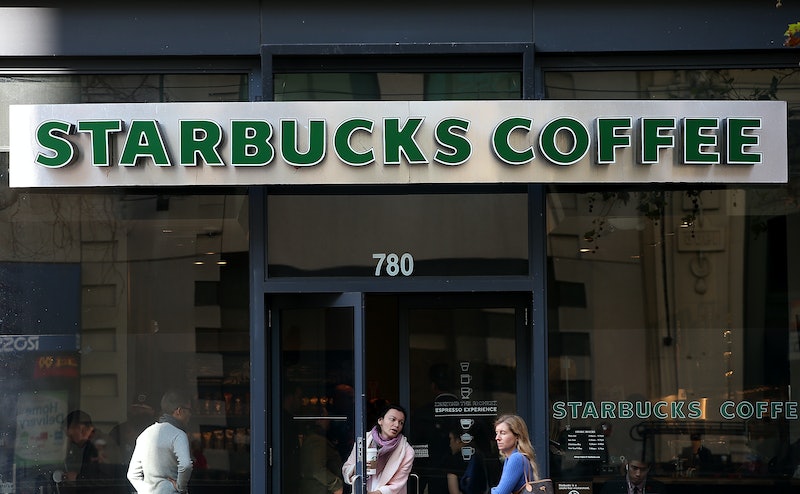 It is a truth universally acknowledged that a person in possession of a hankering for coffee must be in need of a Starbucks. This is especially true for people who live in big cities like New York — and hey, guess what? If you’ve ever wondered how many Starbucks locations there are in New York, a spectacularly enlightening piece of data analysis by Python programmer and CUNY Baruch College student Aleksey Bilogur has some answers for you. Bilogur has not only built a map showing every Starbucks location in Manhattan, but moreover, he has determined how far away the average Manhattanite is from a Starbucks at any given moment. Because obviously this is vital information for your everyday life. Neat-o, right?

Bilogur pulled his data from Yelp — which, he realizes, isn’t perfect; as a number of commenters on Reddit pointed out, there are actually a lot more Starbucks locations in the outer boroughs than Yelp seems to think there are. However, after looking at a couple of different APIs, Bilogur determined that Yelp’s data was the most helpful of the bunch; accordingly, that’s what he went with. Additionally, since he was focusing his analysis on Manhattan, the outer borough issue didn’t impact the final results.

Once he had the basic map completed, Bilogur set out to answer the question about which he was the most curious: At any given location in Manhattan, how far are you on average from a Starbucks? To figure this one out, he created a point cloud of 2,000 random Starbucks locations, crunched some numbers, and determined that the average distance between a person dropped anywhere in Manhattan and one of those locations is 1,335 feet. Given that the average length of an avenue in Manhattan is 750 feet, and that there are approximately 20 city streets (at 264 feet per block) per mile, that means that anyone on the island is a little over two avenues or about five streets away from a Starbucks at any given moment.

I have to say, I find this piece of data analysis enormously satisfying. I’ve long held a theory that, standing from the doorway of any Starbucks in New York, another Starbucks will always be visible to the naked eye; hypothetically, you might actually be able to traverse the entire island of Manhattan by moving only from Starbucks to Starbucks. While Bilogur’s results don’t quite support that theory, they do come pretty close to it — and hey, a similar piece of analysis conducted by Ben Wellington in 2014 found that about a fifth of Manhattan is a mere two city blocks from a Starbucks, while half of it is only four. So either way, you’re always within a proverbial stone’s throw of a caffeinated pick-me-up.

However, I also suspect that my fondness for both Bilogur’s and Wellington’s studies probably stems from personal experience. Anecdote time: After I moved out of New York in 2013 — where I’d spent a full decade, which at the time was my entire adult life — I spent two and a half years living in suburban New Jersey… and there was almost nothing I could get to without driving. While it’s true that Starbucks is by far from the only coffee option in New York, it’s definitely one of the most accessible ones… and believe you me, it’s only after you live several towns away from seemingly mundane things like the nearest Starbucks that you realize exactly how nice it is to be able to just, y’know, walk down the block to satisfy your Caramel Macchiato craving without making a whole production of it.

I’ve recently relocated to another major metro area (DC, in this case), where I once again have the glorious accessibility afforded by walkable areas and public transportation. There is now a Starbucks across the street from my apartment. And I love it.

To see more of Bilogur’s analysis (including fancy chunks of coding and a whole bunch of fun maps), head on over to his website. Now if you’ll excuse me, I have a Molten Chocolate Latte to drink.

More like this
Starbucks Released New Menu Items For The Summer
By Emma Garza
A Beginner's Guide To Drinking Whiskey
By Alexis Morillo
How To Make The Watermelon, Feta, & Mint Salad Trending On TikTok
By Emma Garza
The 5 Best Containers For Overnight Oats
By Ileana Morales Valentine
Get Even More From Bustle — Sign Up For The Newsletter