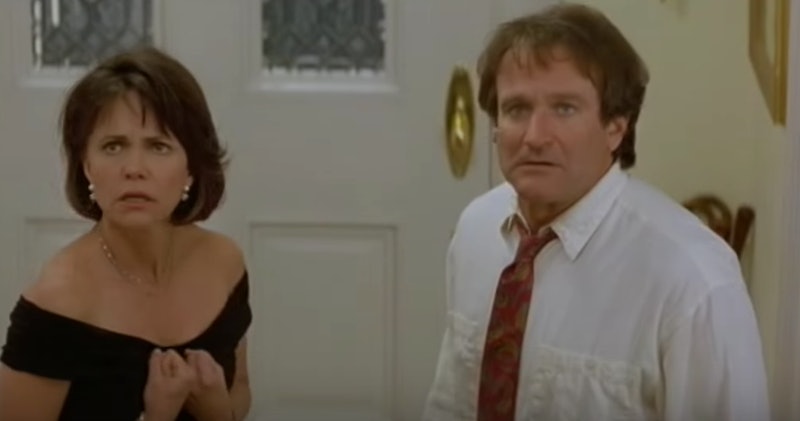 Unfortunately, as we know, not every scene that is filmed makes it into a movie. There's only so much time the powers that be can spare, and, thus, the editors have to cut out certain moments, regardless of how wonderful they may be. Despite being one of my all-time favorite films, Mrs. Doubtfire also apparently suffered this fate. Per Entertainment Weekly, lost footage from Mrs. Doubtfire has been released by YouTube user Matthew Keys. After seeing it, it's kind of amazing to me that they didn't include it in the finished product because of how integral these scenes are to the story.

The video starts off with Lydia's Spelling Bee and her dad, Daniel, getting there late. Not only does his lateness distract Lydia, but the subsequent fight he has with estranged wife, Miranda, causes her to lose altogether. While it may not seem like much, it's a deeper look into the stoic Lydia's character, and it also heightens the tension between Daniel and Miranda. But it's what happens when they leave the Spelling Bee that's truly the most poignant.

Lydia, understandably upset, calls out Daniel on his failings and voices her hurt over her parents' divorce, asking, essentially, why they couldn't just fake it to keep the family together. His response to her is absolutely everything. It's what every kid going through a divorce may not want to hear, but needs to.

Then, there's a scene that appears to take place after Daniel is outed as Mrs. Doubtfire, considering he shows up sans mask but still in Mrs. Doubtfire attire. Both Daniel and Miranda have at it, and they both make below the belt comments that solidify that things are really over between them. It's clear in this scene that the divorce is not an impulsive decision based on a rough patch; it's needed. I think I would have wanted to see this in the film. It makes their divorce seem more real. In a way, it makes both characters seem more human.

You can check out the "Mrs. Doubtfire: Deleted and Alternate Scenes" below.

See? Those scenes are emotionally rough, but nonetheless essential.

More like this
Ryan Gosling’s Ken Just Got The Seal Of Approval From His Partner Eva Mendes
By Rachel Mantock
At 28, Emma Thompson Was Already A Star — But Unhappy In Love, Actually
By Olivia-Anne Cleary
9 Photos Of Margot Robbie & Ryan Gosling As Rollerblading Barbie & Ken
By Alyssa Lapid
What Does The Presley Family Think Of 'Elvis'?
By Arya Roshanian
Get Even More From Bustle — Sign Up For The Newsletter