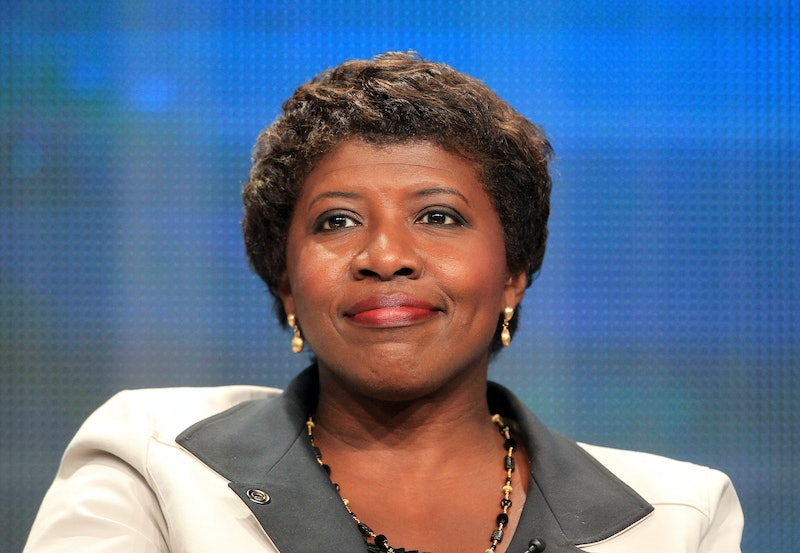 There's plenty of buzz surrounding Thursday's Democratic debate, during which Sen. Bernie Sanders and Sec. Hillary Clinton will go head-to-head for the first time since Sanders' big win in the New Hampshire primary. But the candidates aren't the only newsworthy feature of this debate. PBS' Gwen Ifill will be the first black female moderator of a 2016 presidential debate. This will be Ifill's first time moderating such a debate. She has previously moderated two vice presidential debates — one in 2004 and the other in 2008.

Ifill has led a distinguished career as co-anchor and managing editor of PBS NewsHour, and as moderator and managing editor of Washington Week on PBS. She has been with PBS since 1999, covering politics broadly, following seven presidential campaigns, and leading substantive round table discussions. Testaments to her journalistic excellence include a 2008 Peabody Award given to Washington Week and more than 20 honorary doctorates. Despite these many accomplishments, 2016 will be the first time she takes a moderator's chair at a presidential debate. This is more than just a personal triumph for one woman; it's the first time a woman of color will moderate a presidential debate since Carole Simpson did so in 1992.

Since that 1992 debate, no person of color had served as moderator of a presidential debate up through October 2015. In January 2016, Lester Holt moderated a Democratic debate, marking a step in the right direction. The lack of diversity among debate moderators was a subject of controversy in the 2012 election cycle. In 2012, the National Association of Black Journalists publicly decried the lack of Latino and black moderators, and the Spanish-speaking network Univision issued strong protests.

Along with a lack of people of color in the moderator's seat, there has been a notable absence of women in the position, at least up until the 2016 election cycle. As of October 2012, there had only been four female presidential debate moderators. The 2016 cycle has been kinder to women on the big stage, with prime-time moderators including Rachel Maddow, Megyn Kelly, Martha MacCallum, and, as of Thursday, Ifill and co-moderator Judy Woodruff.

Along with the value Ifill's experience can be expected to add to the debate, her presence will help break a long tradition of both white and male faces in the moderators' spotlight. So don't miss Ifill and Woodruff, along with the Democratic candidates, on Thursday at 9 p.m. ET. The debate can be watched on local PBS stations or livestreamed on PBS Newshour' s website.