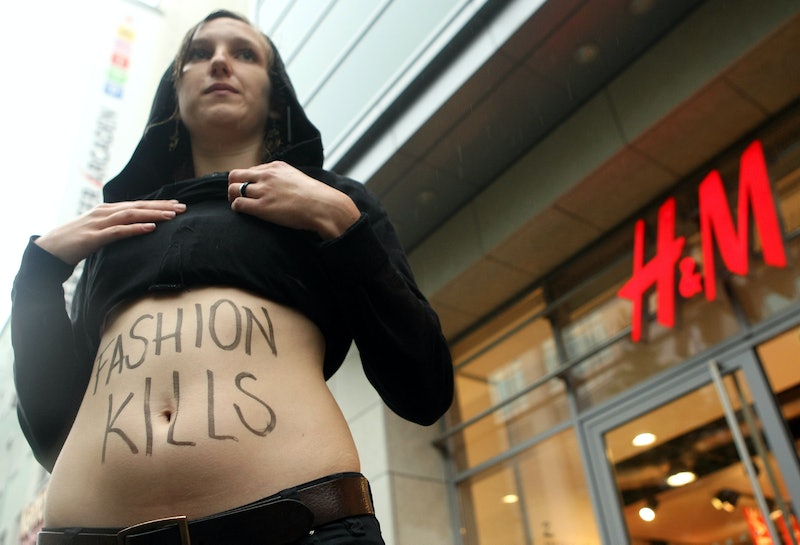 After 45 days of negotiations, 70 major retailers signed on to the Accord on Fire and Building Safety in Bangladesh Monday, agreeing to new safety measures for the country's clothing manufacturers.

These changes come two months after the collapse of the Rana Plaza industrial building in Dhaka left over 1100 factory workers dead.

The retailers linked to suppliers inside the doomed factory have scrambled to protect their image since the tragedy. The agreement Monday is largely considered the result of the intense pressure put on the brands by consumer and labor groups alike.to change their policies.

The Accord gives suppliers of budget clothing labels nine months to pass an inspection using a checklist of health, electrical, structural, and fire safety standards. If their facilities are found to be unsatisfactory, they will be closed for repairs while workers receive full pay for time off. It will be the responsibility of the 70 signatories “to insure that sufficient funds are available to pay for renovations and other safety improvements.”

The list of signatories includes H&M, Zara-owner Inditex, and Benetton. Meanwhile, the American companies who were also implicated in the Rana Plaza disaster are notably absent from the list. Many of these U.S. chains, such as Wal-Mart, Gap, Target, and JC Penney, have announced plans to create their own agreement. They claim that the existing accord gives labor unions too much control. Their plan, composed in conjunction with the Bipartisan Policy Center, is expected to be released later this month.

While these changes are being hailed as much-needed improvements, many are frustrated that the city of Bangladesh itself is not taking greater action. In June, President Obama withdrew trade privileges from the country following intense pressure from NGOs, and the EU has threatened to do the same if factory conditions do not improve.

There's no word yet on how these accords will affect companies' business models—or prices for consumers. But with many Bangladeshi factory workers (most of whom are women) making just $37 a month, U.S. consumers could probably bear to pay a little more at the mall.