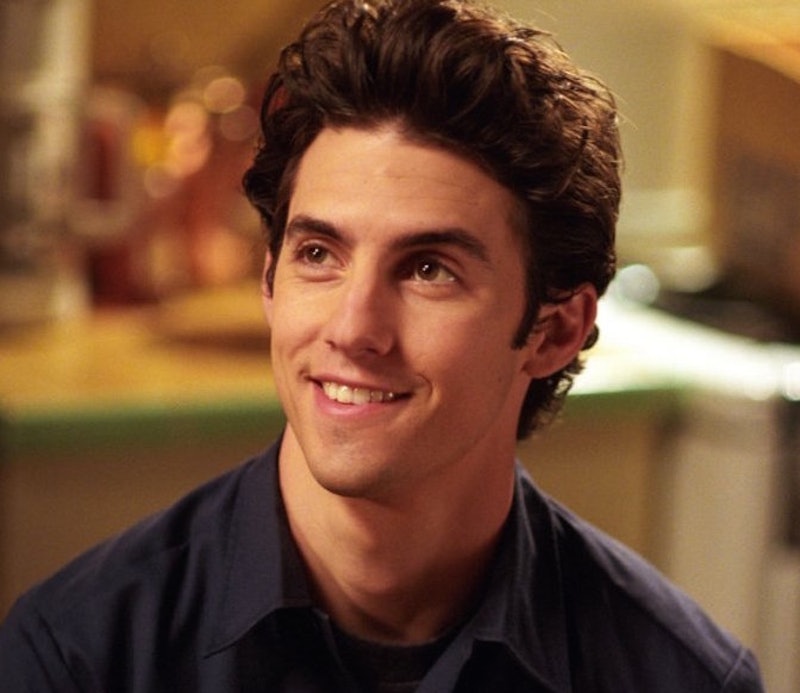 With one cleverly hashtagged tweet, Milo Ventimiglia made a whole lot of Gilmore Girls fans very happy on Wednesday. "What a great time to get back on set with some friends," Ventimiglia posted on Twitter, alongside a photo of an official Gilmore Girls script. Yes, #JessIsBack for the Gilmore Girls revival on Netflix. No word yet on how many of the four 90-minute episodes he'll appear in, but knowing he's confirmed is definitely a good sign for anyone who's been on Team Jess all these years. But, the reason I as a fan am so happy to know that Ventimiglia joining the Netflix revival means Jess Mariano will finally get the ending he deserves.

The last time we saw Jess in Season 6 of Gilmore Girls, he was a published author heading up his own tiny publishing house in Philadelphia. He seemed grown up, and was writing Luke a check to pay him back both literally and figuratively for all he had done for him before. It's true, this Season 6 Jess had come a long way from the Season 2 rebel-without-a-cause we first met who quickly became Stars Hollow bad boy that our very good girl Rory Gilmore couldn't help but find herself attracted to. Of course, Rory could see beyond his leather jacket and realized it was hiding the heart and mind of a poet who was annotating her copy of Howl by Allen Ginsberg — but, it took audiences a little longer to get there. However, that final time we saw Jess, it was clear he's become the person Rory knew he was capable of being all those years ago. It's too bad she was too deep in her own crisis at the time to realize it.

Jess and Rory originally broke up because he just wasn't ready to commit. He was a teenager with a lot of baggage stemming from his abandonment issues, so we'll cut him some slack — but it is hard to defend his leaving town to go find his dad without even giving Rory a heads up. This was ghosting to the worst degree. Even after he leaves without breaking up with her, he chooses only to call her and hang up instead of explaining what was going on. When we see him again in Season 4, he's back in Stars Hollow, running away from Rory until he decides to chase her down and tell her he loves her before once again driving off — only to return later that season to ask her to run away with him. He was clearly too reckless for her then; all passion and no rational thought.

When we get to see Jess next, though, he's changed. He's found a little peace — perhaps, thanks to those self-help tapes Luke gave him — and some direction with his life. Jess shows up during Season 5 to show Rory the short novel he's written and to say he couldn't have done it without her... only to find she's dropped out of Yale. It's Jess who actually gets her to go back to Yale after a disastrous dinner with Logan — a feat not even Lorelai could pull off — which should indicate something about their relationship. With that episode, it's like the tables have turned and he's the one with the head on his shoulders, believing that Rory is better than the person she is pretending to be. It's why it's so sad that last time we see Jess in Season 6, it's so Rory can use him to get back at Logan for his indiscretions. A rather anti-climactic end for Rory's great love up unto that point.

There are a lot of us who want to see Rory end up with Jess: Fans who have always felt like bad timing was the only reason they didn't get back together, and fans that know the two were too young to make it work when they first met but hope now that they may be ready to give it another try. Ventimiglia officially being back for the revival surely makes those Jess and Rory shippers feel vindicated — even if Ventimiglia told E! last year during the ATX Festival reunion of the cast that he actually doesn't think Rory should be with Jess, admitting he's "Team Dean." Ventimiglia did have a few thoughts on what his character would be up to all these years later: "I think Jess is out being Jess, walking away when too many people show up."

See, Jess coming back to Gilmore Girls doesn't have to mean a fairytale happily ever after with Rory. Unlike Dean or Logan, Jess' life didn't totally revolve around her. He was always living for himself, even if he was thinking of her while doing it. He actually had his own storylines, and since Jess was supposed to have his own spin-off, it's clear that writer/creator Amy Sherman-Palladino always had a lot more in mind for him. What happened to Jess in those years after Rory walked out the door? Did he write another book? Did he stay close with Luke?

There's so much more at stake with him then whether or not he ends up with Rory. He may have only appeared in 36 of the series' 153 episodes, but you watched this guy grow up. Like Rory, his character was about much more than who he was dating. The revival could finally prove that.