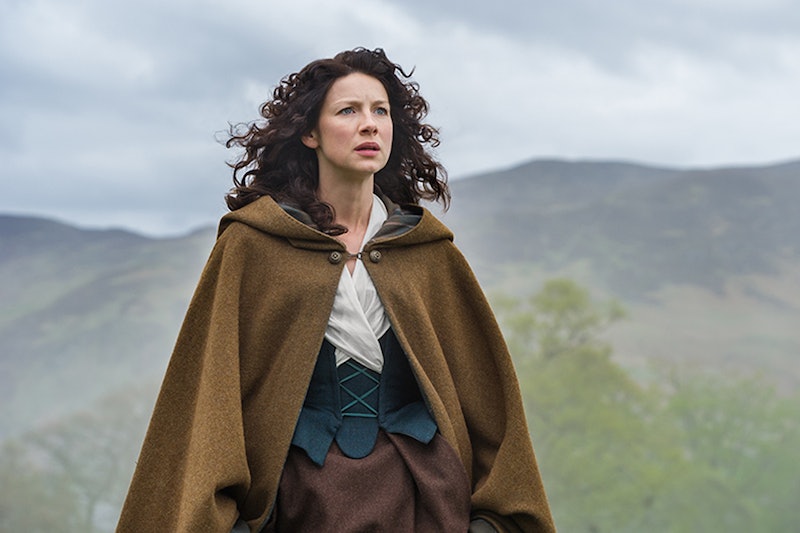 Outlander fans — The news you have been waiting for is finally here. Starz has announced that the premiere of Outlander's second season is just around the corner, and we all need to get excited. The Outlander Season 2 premiere date is set for Saturday, April 9 at 9 p.m. EST. Yes, you heard that right, the premiere is just about two short months away following the Season 1 finale that aired on May 30 this past year, and you can finally stop worrying about when you might find out what happens next. But what can fans expect from the continuation of the time-traveling drama?

The second season will follow Claire Randall (played by Caitriona Balfe) as she inhabits France and struggles to maintain her two-part relationship with both Jamie Fraser (played by Sam Heughan) and Frank Randall (played by Tobias Menzies). However, that's not all that fans can expect moving forward. According to an exclusive trailer released by Entertainment Weekly, it seems as if fans will see tons more battles, the struggles of a baby on the way, and emotions running wild. But it has to be the final moment of Claire's return that makes the heart-pounding trailer even more exciting. Seriously, this first look at Season 2 does not disappoint in any way.

OK, waiting less than two months is still torturous, but I guess it's better than not knowing when we'll find out what happens next. And, honestly, this second season announcement is not coming as much of a surprise from Starz. The first season of popular drama — based off the books by Diana Gabaldon — actually premiered in August 2014 with record-breaking ratings for the network. With 3.7 million viewers between the show's initial opening weekend and online views, Outlander successfully passed the opening ratings for Starz's other hit drama, Black Sails — which recently held the premiere of its third season on January 23, 2016.

So, still need to catch up on the Starz hit? You just have weeks to do so before Season 2 is here. You better get watching, because they didn't give us much notice.