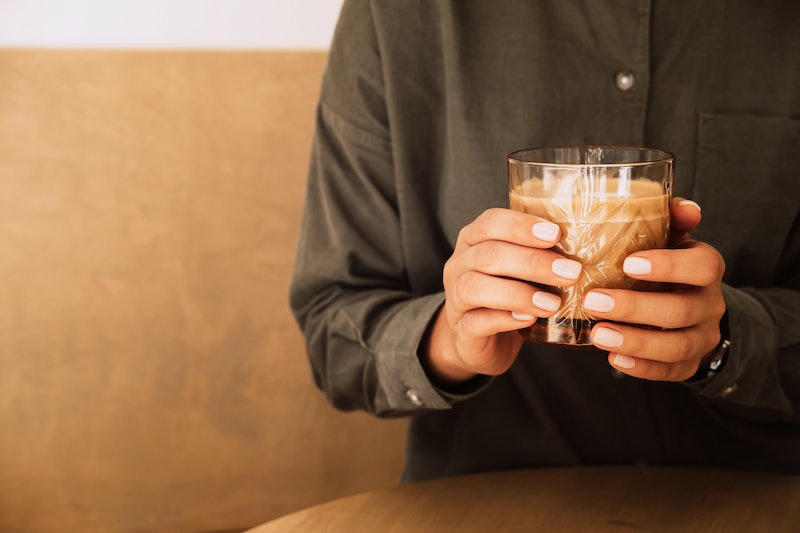 Of all the things that could be triggering your allergies, did you ever think your nails could be the culprit? No way, right? Well, there are tons of signs that you are allergic to your manicure that you might not even associate with your nail care routine. A typical mani that's just a base coat, top coat, and polish can contain dozens of chemicals known to cause allergies and allergy-like symptoms. Add in some acrylics or gels and that number skyrockets. When you add in cuticle oils, hand creams, and nail art supplies, there's a buffet of potential allergens at your fingertips.

In fact a study of allergic reactions due to cosmetics found that nail-related reactions were the second most common (with hair dye being the most common), according to Ronald R. Brancaccio, M.D. in an article for Nails Magazine. Formaldehyde resin, toluene, and ethyl methacrylate reactions are the most common, but you can have a reaction to a wide range of nail care products, even if you've never been allergic to them before.

What's even more bizarre is that you can have reactions that don't seem related to nails in any way, like skin rashes far away from your nails, cold and flu-like symptoms that you dismiss as being a bug, and even black eyes or asthma. If you're a walking medical mystery from time-to-time, talk to your doctor about whether your mani could be to blame!

Your reactions to nail polish can occur in places you'd least expect, an According to Dr. Brancaccio, "One of my patients who is allergic to nail polish got a rash just around her lips that did not develop until four days after she applied nail polish. The rash cleared when she began using a nail polish that does not contain toluene-sulfonamide resin." You can also experience lip swelling, which many people say looks like they tried to do the Kylie Jenner lip challenge. Ouch!

Black eyes from a manicure? It's rare but it totally happens! Basically, some allergic reactions cause swelling in your sinuses and surrounding tissues, which means blood pools under your eyes. It happened to this woman, and she was equally surprised that her nails were the culprit. Your eyes themselves can also experience pain, redness, itchiness, blurred vision, and watering, according to Elise Brisco, M.D. in an article for You Beauty. These symptoms are usually because of fumes.

YouTuber Fionaz Nailz shares what her blisters and swelling look like after a reaction to a specific kind of UV gel. This kind of reaction, while a little more extreme, is on par with what most people with nail product allergies experience. Sometimes the blisters are big, like in the video, and sometimes they're smaller microblisters. These kinds of reactions can be very itchy and painful. They're the kinds of reactions that have you looking to nail products right away and thinking "what have you done to me!"

Red, swollen cuticles and skin around your nails that may or may not itch and look bumpy (like a rash) isn't actually an allergic reaction, according to Dr. Susan Taylor in an article for the Huffington Post, but a skin condition called contact dermatitis. This is your skin reacting to damage and irritation, rather than a true allergic reaction. It's still not pretty, and it can be as annoying or painful as a true allergic reaction. The number one culprit, according to Taylor: methyl acrylate. This is most commonly found in acrylics.

After you get your nails done (or do them yourself) do you feel like your actual nails itch, or do they feel warm for extended periods of time? This is another sign of nail product allergy, most common with gels, according to Doug Schoon, M.S., Vice President of Science and Technology for Creative Nail Design. This happens most often when the gels aren't cured long enough, and uncured gels remain trapped close to your nails and skin. Those uncured gels can penetrate into your tissues, according to Schoon. The best fix? Making sure your UV light is fresh, as they can lose power after a few months of consistent use.

You might experience cold or seasonal allergy-type symptoms if you're allergic to something in your manicure. This happens when you breathe in fumes, which cause a condition called allergic rhinitis, according to Healthline. Allergic rhinitis can also cause hives, fatigue, blisters, coughing, sore throat, sneezing, and other respiratory or skin discomforts.

What if you get your nails done and then get a rash on your stomach, or your eczema flares up? We talked about rashes, swollen skin, and blisters around your nails, but you can really have a reaction in any part of your body. And it doesn't even have to be a visible rash, or hives. Sometimes you just feel itchy. These allergies are often the trickiest to diagnose because they can come on out of nowhere and appear in places completely unrelated to your nails. Chemical patch test can help your dermatologist narrow down the exact cause.

If you have an allergy to a nail product, you don't have to be a sad panda. There are brands that are 3-free, 5-free, and even 9-free. You can also find water-based nail polishes and removers.