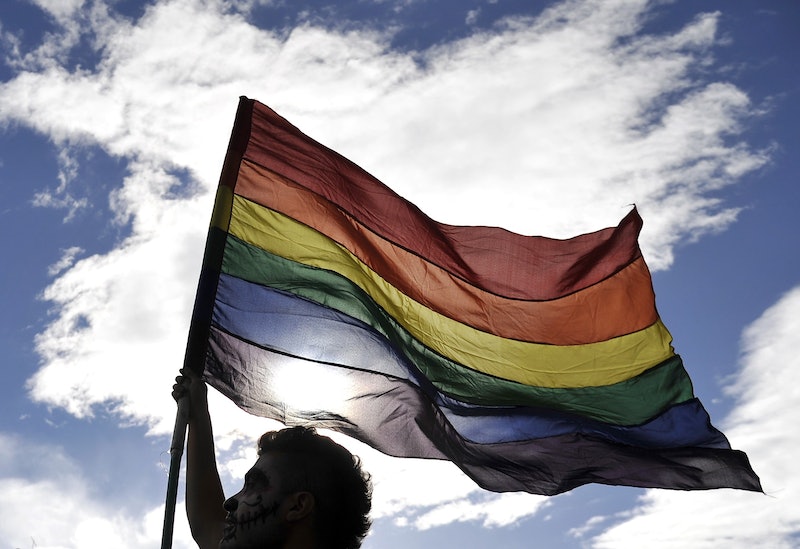 In spite of major steps forward in terms of equality and recognition, it appears that life doesn't always "get better" for the LGBTQ community. A recent study released from Northwestern University shows that LGBTQ youth who experience harassment and assault are likely to have long-term effects on their mental health, including depression and post traumatic stress disorder (PTSD). The study, which tracked roughly 250 LGBTQ youths in Chicago, found that for many students, experiencing harassment and bullying in school had serious effects on their mental health. This finding breaks the "kids will be kids" narrative that is often used to dismiss the severity of bullying. On this subject, Brian Mastanski, lead researcher on this study, explained, "If these incidents, which might include physical and sexual assaults, weren't happening in schools, people would be calling the police. These are criminal offenses" — which I think does a great point of putting the stakes in context.

Bullying and harassment are damaging and unjust for anyone to experience, but particularly for LGBTQ students, it can normalize unfair treatment and animosity, as well as promote feelings of isolation and loneliness. For context, LGBTQ youth are four times more likely to attempt suicide than their heterosexual peers, according to the Trevor Project. Incidents of victimization (bullying, harassment, etc) increase likelihood of self-harm by 2.5 times on average. In middle and high school settings in general, 60 percent of LGBTQ youth report feeling uncomfortable or unsafe because of their sexual orientation according to the CDC. Data released from the CDC also shows that LGBTQ students report more bullying than their heterosexual peers, including students who are questioning their sexuality, but do not necessarily identify as part of the LGBTQ community. With these statistics in mind, it's clear research on the effects of harassment and assault against LGBTQ youth is particularly important, as it may provide a means through which to intervene and offer students support, as well advocacy.

Now that we've established some foundation for the topic, and why it's important, let's look a little deeper into the specifics of the study, and their findings:

1. How The Study Worked

Over the course of four years beginning in 2007, researchers from Northwestern University examined 250 youth in Chicago who either identified as LGBTQ or identified as experiencing same-sex attraction. The study established the students' mental health as a baseline; then, over the course of four years, the students participated in seven interviews with researchers to discuss their experiences with harassment and bullying as related to their sexual orientation.

2. What's Different About This Study?

This study certainly isn't the first to look at the experiences of LGBT Qyouth, and how harassment and bullying can affect their self-esteem and mental health. However, this study differs because it looks at how the accumulation of said harassment and bullying affects the subjects over time — that is to say, while even one incident of bullying, harassment, or assault can create long-term damage, this study found that a youth's likelihood of developing depression or PTSD increased when these attacks increased over time.

3. What Are The Findings?

On the bright side, the study did find that most targeted LGBTQ youth (84.6 percent) experienced decreasing levels of victimization over the four years. "Victimization," here essentially refers to having a reaction (usually psychological or physical trauma) to a crime — in this case, bullying. On the other hand, 10.3 percent experienced increased levels of bullying over the course of the study, while about five percent maintained the same high levels of victimization the entire time. Based on the findings, it appears that girls are more likely to experience decreased victimization over time. Studies also found that the boys in the study, on average, experienced more physical and verbal assault than the girls. The students who experienced moderate harassment which increased over time (for example, having objects thrown at them) were at the highest risk of developing mental health issues, such as depression or PTSD, later in life. Unsurprisingly, students who continually experienced high levels of victimization, such as physical or sexual assault, were also at high risk levels for developing mental health issues later on.

So, what's the takeaway? While life certainly "gets better" for many LGBTQ youth who experience bullying, it's no guarantee. While the mindset that bullying is a "normal" part of adolescence, and something "everyone goes through" can be comforting for some youth to hear, it can become dangerous when young people are experiencing assault, harassment, and bullying that effects emotional and mental states. As this study demonstrates, bullying can have serious effects on mental health, and educators and advocates should take that notion to heart when they consider how to respond to reports from targeted youth, LGBTQ or otherwise.