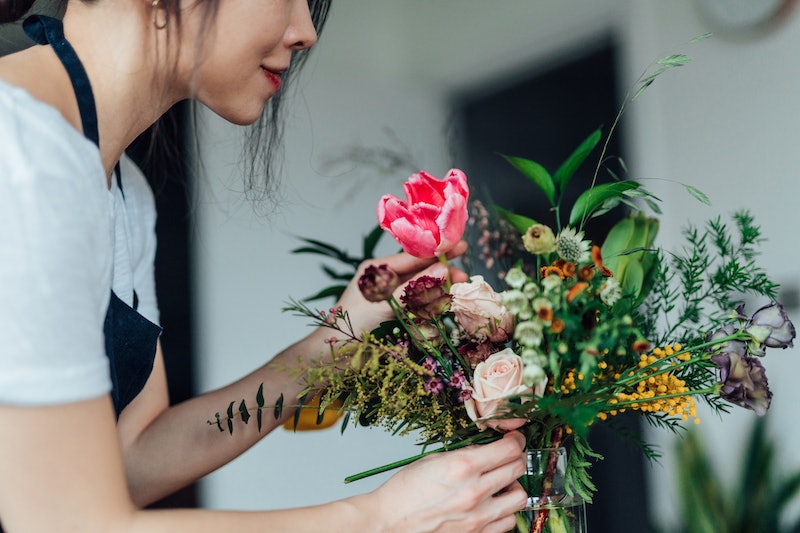 We live in an age of self-help, self-improvement, and almost constant self-analysis. But maybe it's time we learned how to stop trying to fix ourselves so much and just enjoyed life a little more. I can't tell you how many times I've heard myself or someone close to me obsess about the areas of our lives we want to be "better" at. Budgeting, career goals, health — even the amount of books we read somehow can morph into an area of perceived weakness or fault.

In a piece for Psychology Today, psychotherapist Nancy Colier said, "The fear that fuels our self-betterment mission is the belief that we are, at our core, not what we should be, faulty, broken, lacking, nothing, unworthy, undeserving, unlovable, or some other version of not okay."

And to be honest, I'm kind of tired of it. I'm tired of phrases like, "I really need to work on," or, "I really should be better at." I'm not saying self-awareness and self-improvement aren't worthwhile endeavors — becoming a better listener, trying to help others more, taking better care of our bodies, etcetera are all great in theory, but I also think it can just get really exhausting and counterproductive to walk around feeling like giant balls of failure all the time.

At the end of the day, none of us are perfect and none of us are ever going to be perfect, so maybe it's time we went a little easier on ourselves and focussed less on all those things we think would make us better. And in the spirit of letting go of self-perfection, here are seven ways to help you stop trying to fix yourself so much.

1. Ask Yourself Why You Have An Inner-Critic

In a piece for Tiny Buddha, life coach and podcaster Lauren Fire said to first ask yourself why you have an inner critic who tells you that you need to be better. She said in her case, it was because she believed that "perfect Lauren" was the version of herself deserving of love. In my own case, I think it's because I grew up around women who were extremely self-critical of themselves and of other women, especially when it came to weight and outward appearances. As soon as you begin to understand why the voice is there in the first place, you can begin to question its validity and separate it from reality.

Fire said that in her own experience, FIre found that actively and consciously encouraging herself before beginning a task had tangible and concrete effects on her life. "Instead of pushing myself with shame, hate, and self-criticism, I am learning to motivate myself with praise. Instead of threatening myself, I am pumping myself up," Fire said. Be your own personal cheerleader. Tell yourself you can do it, and even if you don't do it, tell yourself it's okay.

According to psychotherapist Jeffrey Sumber in a piece for PsychCentral, it's important to consciously set an intention to be less critical of yourself. “It is vital that we set an intention for ourselves that we are willing to shift paradigms from a world of blame, doubt and shame to a world of allowance, tolerance, acceptance and trust,” he said. “If I set my intention that a life with self-acceptance is far better than a life of self-hatred then I begin a chain reaction within my being geared to a life of peace."

4. Distance Yourself From People Who Bring You Down

In the same PsychCentral article, Joyce Marter, LCPC, a psychotherapist and owner of Urban Balance LLC, said to remove yourself from people who make you think negatively about yourself. Sumber also suggested asking yourself, "Who speaks negatively to me? Who reinforces negative self talk" in order to better understand who helps to strengthen your own inner-critic.

5. Remind Yourself No One Is Perfect

In a piece for Mindbodygreen, life coach and yoga instructor Kim Shand wrote, "Self-improvement for the sake of fixing yourself can become an addiction with no final destination," and this is because no one — not even the people we most admire or want to be like — are perfect. If perfection is your end goal, then you will always be left dissatisfied.

In that piece for Psychology Today, Colier said to simply give yourself permission to be who you are. "Give yourself permission to have the experience you are having, whatever it is, with no story about whether it is right or wrong, good or bad. Feel how you actually are. It’s that direct and that simple. No judgments allowed," she wrote. She also said that this will help shift our minds from trying to be lovable, to just loving ourselves.

7. Consider The Possibility That You're Fine

On his website, life coach Darren Stoupe said to allow yourself to consider the possibility that you are already whole and don't need any changing. Consider for a moment that there's not a single part of you that needs to be "vanquished, removed, or fixed." Once you stop yourself from wishing and wanting to be something else, you're able to come to terms and accept the person who's actually there — you!

Turning off our inner-critic can be easier said than done. However, it definitely starts with recognizing that it often doesn't come from a super rational place, as well as reminding ourselves that the pursuit of perfection will always leave us empty. So worry about whether you're doing things right less, and focus on just enjoying yourself more!