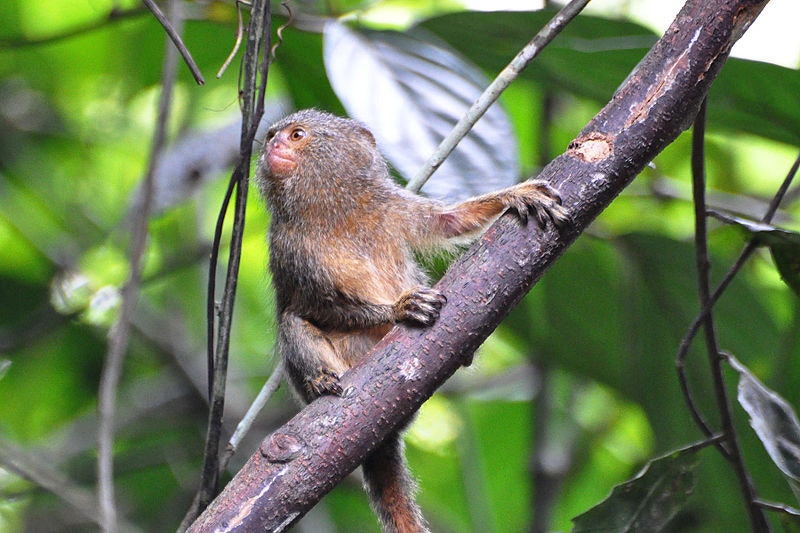 Imagine a world where you have unlimited money and no one to stop you from spending it on randomly wondrous items. If you do, you might find yourself in the shoes of the super wealthy Chinese elite, who have been purchasing ... thumb monkeys. "What is a thumb monkey?" you're probably wondering about now. (You didn't read that wrong, by the way.) Thumb monkeys are the latest must-haves for the ultra wealthy. It's the perfect combination of wacky, rare and slightly illegal that keeps business booming. A thumb monkey is a pygmy marmoset — the world's smallest monkey.

It looks like this animal has become a popular accessory for those willing to dish out the dough. Despite coming with a price tag of $4,500, this creature is finding itself in the homes of people who run billion dollar empires. When I wrote that buying these is slightly illegal, what I meant was that selling them is totally illegal but clearly not stopping anyone. Having that much money is like having a fast-pass at an amusement park. Normal rules are bent or completely ignored by those who possess it. And honestly, by the looks of this tiny creature I can see the appeal. They are super small. Smaller than your average hamster, and cuter than a field mouse.

Thumb monkey's nickname comes from the fact that they tend to wrap themselves around their handler's fingers and resemble intricate jewelry. I sure wouldn't mind being proposed to with one of these little guys. PETA will, but I won't. Considered endangered by the International Union for Conservation Nature, pygmy marmosets will just have to be fantasy gifts for those of us who don't own cruise ships. Until then I will keep looking up videos online and hoping that someone at the zoo lets me see them in person.

This species of money can be found in the highest parts of the South American rainforests. They are different enough from their cousins to be considered their own species. Their tails are super long and when they are fully grown they weigh as much as a stick of butter. More importantly, look at their cute little faces! I mean, just LOOK at them. So adorable. Their hands are so tiny! They have thumbs, people, these thumb monkeys have actual thumbs. I just want to pet one of them.

Thumb monkey is not their only nickname. It turns out that they have sometimes been referred to as Little Lions or Pocket Monkeys. Because of their little size, the monkeys use their hair to appear bigger. Predators think they are much rounder than they appear. They also appear to not be pack animals. They don't live in large groups, instead they choose to congregate in groups of twelve or less. Hey, I wouldn't want to compete for cutest animal with them either!

More like this
21 Absolutely Adorable Christmas Gifts For Dogs
By Carolyn Steber
Dyson Is Dropping Futuristic, Air-Purifying Headphones
By Rachel Lapidos
This AI Filter Shows How You’d Look In Different Time Periods
By Alexis Morillo
65 Funny Dares You Can Send Your Friends Over Text
By Siena Gagliano
Get Even More From Bustle — Sign Up For The Newsletter