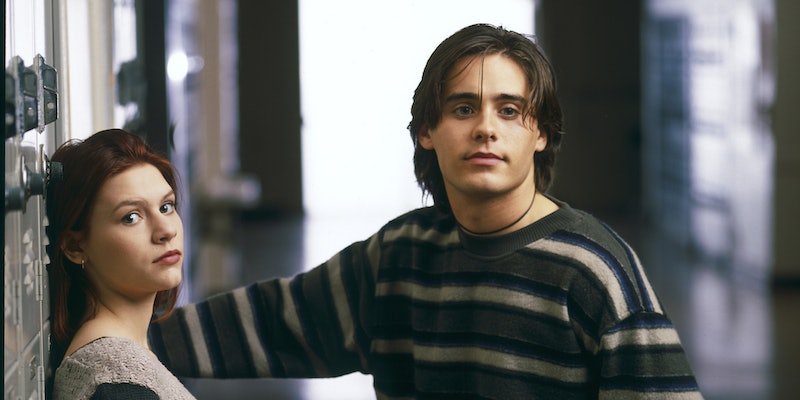 Angela Chase's so-called life entered the homes and consciousness of '90s youth culture at the most opportune time. A time where authentic representation of female adolescence in oversized plaid hadn't been authentically explored. The dramatic ABC series told from Angela's 15-year-old point of view was compelling and honest, and even though it only lasted one season, most of My So-Called Life's candidness about teenage life still holds up today. And if you're a fan of My So-Called Life, these television shows are for you.

It's likely that you might have been too young to watch and appreciate the show when it was actually on air between 1994 and 1995, and, if that's the case, it's also likely that you discovered it later, either by seeking it out or catching reruns of it after its sad (and untimely) cancellation. Either way, I'm almost sure that you found something deeply resonant about Angela and her group of friends, something that really pulled you into their lives. And something that you might be missing right now. Because, if you're like me, you've had a hard time finding anything to fill up the ripped jeans-sized hole My So-Called Life left in your heart.

It's true that (sadly) nothing will 100 percent fill that for you. But that doesn't mean you can't get pretty close. Here are 11 shows to watch if you loved My So-Called Life.

Like My-So Called Life, The Wonder Years was narrated by a young person trying to make sense of the cruel and harsh adult world. Difference being of course, setting (the 1960's instead of the '90s) and gender (Kevin Arnold was the narrator). But the unrequited love, the friendship perils, the "growing up" aspects that you loved so much about My So-Called Life? You can find those here.

Party of Five just happened to run its first season contemporaneously with My So-Called Life. Chronicled around the story of five children learning how to cope after their parents die in a car crash, Party of Five took what My So-Called Life was doing, but added in a larger dose of familial relationships.

Starring the once unknown Kerri Russell as titular character Felicity, this WB show was similar in a lot of aspects to My So-Called Life. Just replace the vicissitudes of high school with this vicissitudes of college. And add in one incredibly polarizing haircut.

Hopeless teen romance. Small town tension. The fixings of what made My So-Called Life good can be found in this creek. Dawson's Creek, I mean. Hell, these love triangles/love sagas/endless love tribulations could send those of Angela Chase's into a tizzy.

South of Nowhere deals with the concept of "not fitting in" almost as accurately as My So-Called Life. It also deals with its fair share of real world issues — like sexuality, racism, domestic violence, drugs, and teen pregnancy to name a few.

Like My So-Called Life, Freaks and Geeks was given an unfairly short time on air and reached cult-like status after people were able to realize it was way ahead of its time. (Hindsight!) Both shows offer an at times cringe-worthy naturalistic approach to the way teens really behave — awkwardness, self-hatred, and all.

The premise for Joan of Arcadia was pretty different (girl talks to God, God talks back) but the foundation was familiar — albeit a bit better than most of its counterparts. Joan of Arcadia had a way of delivering complex characters, depicting teenagers as fully fledged humans, and delving into questions of existence — all while never appearing preachy.

Everyone's favorite misanthrope — the sardonic and droll Daria — will please even the most die-hard My So-Called Life fans. Daria represented a complex teenage person. One that defied what was expected of her, and, like the characters in My So-Called Life, Daria wasn't one singular thing. She was a lot of them, all together, and at once.

Beverly Hills, 90210 gave us such a gift. A group of beautiful, rich teenagers amongst the backdrop of melodrama, wealth, and also melodrama. Though it wasn't as realistic as My So-Called Life in its depiction of the three-dimensional "teen" (everyone fit into a nice and neat category in this zip code), Luke Perry was there, so that counts for something.

Pretty much taking the groundwork from Beverly Hills, 90210, and making it slightly (only slightly!) less silly, The O.C. launched itself into instant success. It had a short four season run, but it challenged something about teenage dynamics, and, amidst all the extraneous subplots, captured some real and authentic moments between its leads.

Jenna Hamilton, much like Angela Chase, was 15 years old when Awkward premiered on MTV. In fact, of all the things on the list, you could say that Awkward most encompasses the intent of My-So Called Life in that it aims to do one thing: capture teen angst in an honest fashion, without judgement or belittling.

While I'll forever mourn My So-Called Life's premature cancellation, I suppose these shows can sub in for now.