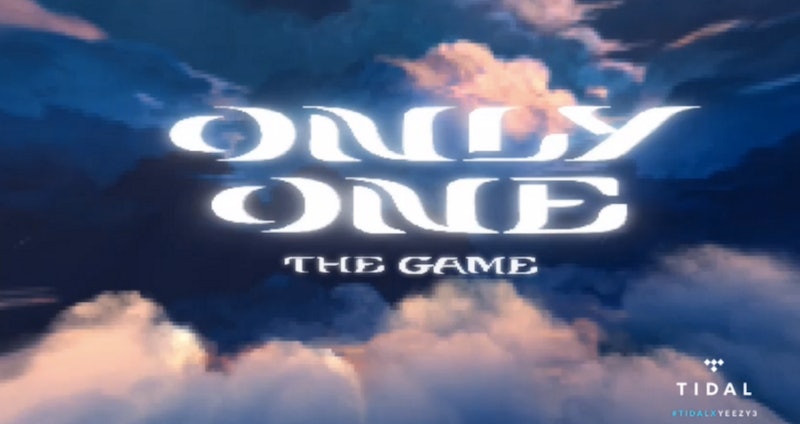 Yeezy Season 3 is upon us, and Kanye West has released The Life of Pablo in the form of a livestream on TIDAL in which he played the entire album live for the world — TIDAL account or no TIDAL account. However, as many people are talking about something else Kanye did as they are about the album. During the live stream, Kanye teased his video game, Only One: The Game, which he announced that he was working back in February 2015. The game, which is a "tribute to his mother," according to his The Breakfast Club Power 105.1 interview, was only displayed in the form of a very short sneak peek, and yet that sneak peek is all anyone needed to see to realize how strange it is. As in, I'm still not sure what I just watched, even after looking at the pictures that people took of the preview, myself included.

The snapshot of the game features a cloudy atmosphere that is soon broken by an angel riding a winged horse. More angles show up, all flying toward a bright hole in the sky, because I guess maybe the object of this is to break into Heaven? Or maybe break out of Heaven? Or maybe free someone from Heaven? Or maybe you start the game escaping from Heaven and then have to break back in? I'm not sure, just as I'm not sure what this has to do with Kanye's late mother aside from the angels, but I'm definitely ready and waiting to find out.

Naturally, I'm not alone. People might not quite understand what it is that Kanye is going for with this video game, but they're all excited to play it. And also confused by it. But also excited for it. I don't know, there are a lot of feelings floating around right now.

Yeah, it's like that. One thing's for sure: Kanye has definitely managed to impress his audience and give them something that they'll be talking about for ages to come. This level of head-scratching and emotional empathy won't fade in just a day. When the video game is coming out, and exactly how good it will be, still remains to be seen. However, considering this is Kanye, we can at least say it will be an interesting experience.

More like this
Kim Kardashian Father’s Day Tribute To Kanye West Called Him “The Best Dad”
By Stephanie Topacio Long
Mollie King & Stuart Broad Have The Most Relatable Wedding Plans
By Sophie McEvoy
Tristan Thompson Plays Drake’s Best Man In A Music Video Wedding With 23 Brides
By Grace Wehniainen
Photos Of The 'Elvis' Cast vs. Their IRL Counterparts Will Have You All Shook Up
By Grace Wehniainen
Get Even More From Bustle — Sign Up For The Newsletter