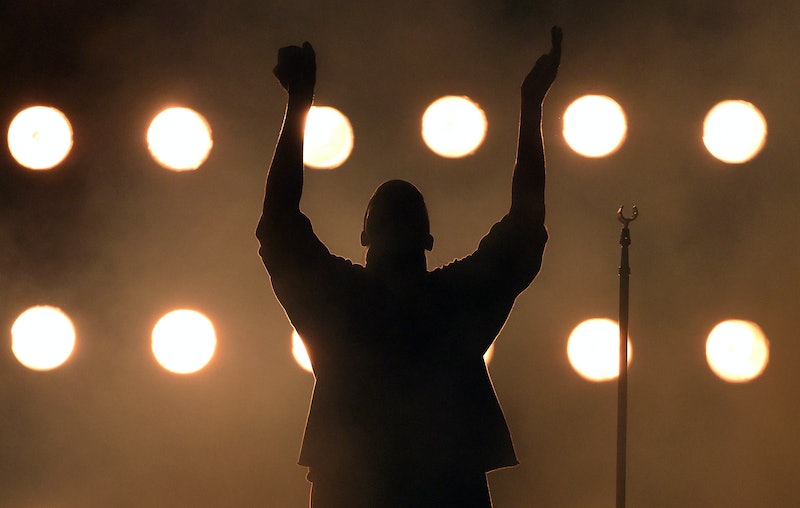 To put it in the terms that Kanye West's The Life of Pablo was cloaked in pop culture mystery would be an understatement. Though the rapper has given fans what felt like a million potential titles for his new album (among them So Help Me God, WAVES, and my personal favorite, SWISH) he finally revealed the official name on Wednesday after first cryptically leaving just the T.L.O.P. initials for fans to decipher. West took to Twitter to announce that the name of his new album was The Life Of Pablo and now fans have one better than just the title: they had the ability to listen to the album all the way through. West played the entirety of The Life Of Pablo at a concert in Madison Square Garden, which was then broadcast to subscribing fans via a live stream on Tidal.

If you didn't catch the live stream, don't worry: It's available to replay in full on TIDAL, and West's lyrics have all been transcribed online. So, while you can't really listen to the songs track-by-track until the album officially drops (you can always replay the Yeezy Season 3 presentation, though!), you can get a good sense as to what West was talking about. For example: What pop culture references did West make on The Life Of Pablo ?

While we'll need West to confirm all of this, here's what pop culture tidbits West may have dropped:

In "Ultra Light Beams," Chance The Rapper's verse mentions the "Chandelier" singer (and guest on West's track "Wolves") with the line "My daughter look like Sia, you can't see her."

Chance The Rapper's verse in "Ultra Light Beams" also mentions that iconic PBS character with the line "I been this way since Arthur was an anteater."

In the same verse on "Ultra Light Beams," Chance The Rapper gives actor Wesley Snipes and director Spike Lee a shoutout, with the line "that left a script on your a** like Wesley and Spike."

Kanye West and Taylor Swift may be good now, but if this song lyric is about her, she likely (and rightfully so) won't be pleased. In "Famous," West seems to call out the "Bad Blood" singer with the line: "I feel like me and Taylor might still have sex... Why? I made that b*tch famous."

West may have answered the question of which Pablo his album was referring to — Escobar or Picasso — in his song "Freestyle 4," and it seems to be the Mexican drug lord/subject of Netflix series Narcos Pablo Escobar. The line that solidifies it? "Pablo bought a Roley and a rottweiler/ Seem like the more fame, I only got wilder/ Hands up, we just doing what the cops taught us." I don't think Picasso had a Rolex.

West also calls out the animal rights organization in "Freestyle 4" with the line "P.E.T.A.'s mad 'cause I got a jacket outta possum."

In the same track, West references both the iconic Apple founder and the wrestler: "Awesome, Steve Jobs mixed with Steve Austin/ Rich slave in the fabric store picking cotton."

In the same song, West possibly calls out sister-in-law Khloé Kardashian's ex, rapper French Montana, with the line "going out like Montana." I mean, he could also be talking about Joe Montana, I guess. Or the state? But probably not.

Well, now we know how West feels about Ray J. On his song "High Lights," West references his wife's ex-boyfriend, stating: "I bet me and Ray J would be friends, if we ain't love the same b*tch/ Yeah, he might have hit it first, only problem is I'm rich."

Welp, that's not very nice, West. On "High Lights," West references his brother-in-law and his maybe-relationship with Tyga's ex Blac Chyna: "Blac Chyna f**kin' Rob, help them with the weight." It's pretty body-shamey and mean-spirited, so it really didn't have to be included.

Clearly, while West might be touting The Life Of Pablo as "ONE of the greatest albums" of all time, it's still a pretty modern one — with tons of recent pop culture references to prove it.

More like this
Cardi B’s New Single “Hot Shit” Features Kanye
By Alyssa Lapid
What Is Ariana Grande's Net Worth? When It Comes To Money, She Has No “Problem”
By Hugh McIntyre
Twitter Is Still Flying High After McFly’s Glastonbury Set
By Sophie McEvoy
Lily Allen Was “Quite Emosh” After Performing Sober At Glastonbury Festival
By Stephanie Topacio Long
Get Even More From Bustle — Sign Up For The Newsletter