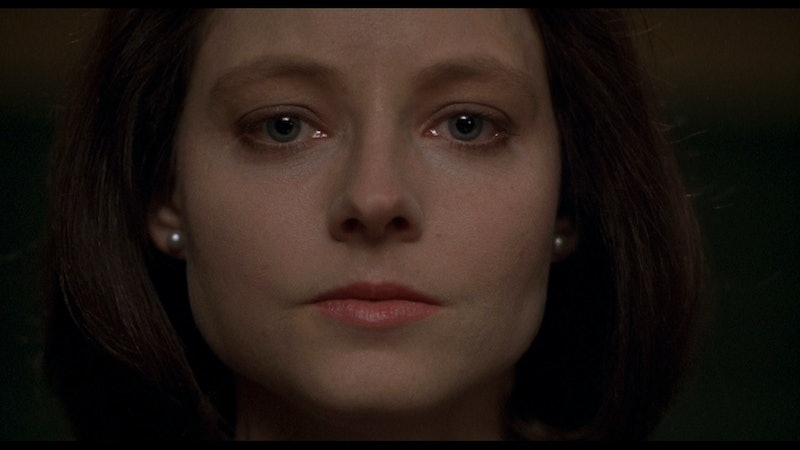 Some movies stay in your subconscious — from the writing to the directing, there are films that become part of the general lexicon, and roles in them that you can't imagine being played by anyone else. Clarice Sterling, principal character in Silence of the Lambs, is one of those roles. Can you really picture anyone but Jodie Foster going toe-to-toe with Anthony Hopkins' totally creepy Hannibal Lecter? Funnily enough, Jodie Foster was not director Jonathan Demme's first choice to play the strong-willed FBI agent.

I'm sure everyone involved with the film is happy of the outcome — Silence of the Lambs is the only horror film to win the Academy Award for Best Picture (only four others—The Sixth Sense, The Exorcist, Jaws, and Black Swan, have even been nominated) and only the third film to completely sweep the ceremony — that is, winning Oscars for Best Actor, Best Actress, Best Director, Best Picture, and Best Screenplay (Adapted). Not to mention the fact that the film's lines and plot have spawned multiple spin-offs and jokes that remain forever embedded in American pop culture. Hello, Clarice, indeed.

I know it's hard to believe, but Demme wasn't sure if Foster was right for the role, even though she had already won an Academy Award in 1988 for The Accused. Let's imagine a world where there is no Jodie Foster and see who else was in the running to play Clarice.

According to Pajiba, Demme really, really wanted Michelle Pfeiffer to play Clarisse. They had just worked on Married To The Mob together, and he thought she'd make a perfect FBI agent. Unfortunately, Pfeiffer took issue with the very violent subject matter of the film, and she just couldn't commit to it. It's not like it hurt Pfeiffer's career — she went on to make movies like Dangerous Minds, The Fabulous Baker Boys, Batman Returns, One Fine Day, and The Deep End Of The Ocean.

Who did Demme go to when Pfeiffer passed? Laura Dern, of course. But she hadn't made Jurassic Park yet, so she wasn't a big name in Hollywood yet, and the studios were hesitant that she would be able to carry the film. Demme, to his credit, deemed Dern "it" after her auditions, but those studios loved Foster more. Sorry, Laura!

I'm not sure that I get this almost-casting, since in 1991 Meg Ryan was coming off flicks like When Harry Met Sally and Joe Versus The Volcano. Would she have had the emotional depth to tackle a role as that of Clarice Sterling? Demme thought so. Luckily for us moviegoers, according to Cinema Blend, Ryan read the script for Silence Of The Lambs and was not exactly pleased with its less-than-sunshiney content. Needless to say, she passed, staying in her lane of romantic comedies like Sleepless In Seattle and You've Got Mail.

I think the fates have it with this one, eh? Obviously, Jodie Foster was meant to be Clarice Sterling, and these actresses went on to roles that made them even more famous than they already were. Hello, Clarice!