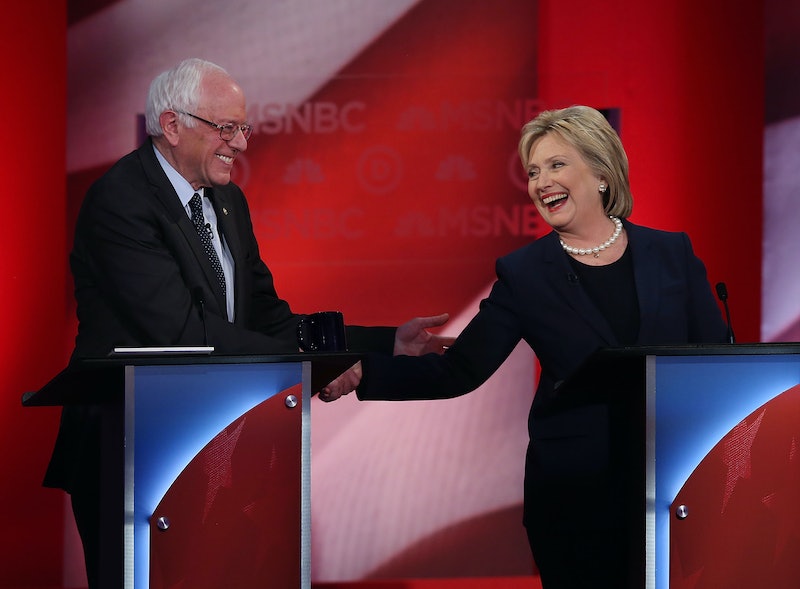 Thursday night was the latest installment in a series of Democratic presidential debates, and the race is proverbially heating up. After Bernie Sanders' win over Hillary Clinton in Tuesday's New Hampshire primaries, the challenge is steeper, the stakes are higher, and the intensity is almost palpable. This Clinton quote from Thursday night's Democratic debate is representative of the culture of the Democratic Party at this time — and especially after some contentious quotes from prominent feminists this week.

This week alone, Sanders' more forceful supporters were told to tone down their zealousness, which has recently bordered on antagonism, and Clinton's supporters in the media, campaign world, and body of voters have made considerable efforts to damage Sanders' reputation. Without the substance of these debates, this would almost resemble the Republican Party's usual dynamic.

On Thursday, however, it was again a time for dialogue, a time to confer over ideas that will improve the state of America, and to distinguish styles of thinking from one another. This fascinating quote from Clinton truly encompassed the forward-moving attitudes the Democratic Party must always maintain to progress as an organization. It should serve as a reminder to never stray from that which is most important. With great agency, she declared:

I have spent my entire adult life working toward making sure that women are empowered to make their own choices. Even if that choice is to not vote for me...

Although figures like Gloria Steinem and Madeline Albright had some harsh words for female supporters of Sanders this week (Steinem has since explained herself), Clinton's own words clarified her feelings on the matter. She explains that she will stand up for women — and their right to choose the candidate most suited to them — whether or not they stand behind her.

Albright outrageously claimed there is "a special place in Hell for women who don't help each other," but perhaps — and Clinton can possibly attest to this — just perhaps, there is a better place for those who vote based on character, ethics, policy, and integrity, instead of simply gender. Clinton has made it perfectly clear that she wants to win the presidency based on merit, and because she will stand for women, not simply because she is a woman. There is certainly a huge distinction between these two perspectives, and luckily, Clinton is fully aware of it.