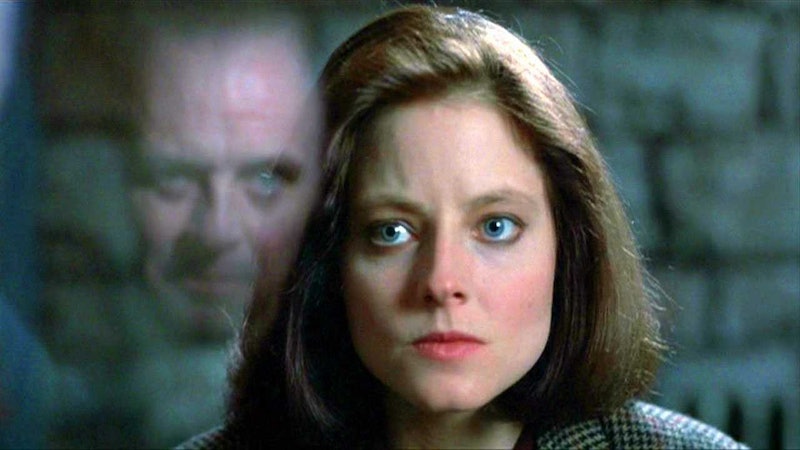 Whether you've seen the film or not, The Silence of the Lambs is one of the most enduring and iconic films from the '90s. The chilling Oscar-winning movie starring Jodie Foster and Anthony Hopkins introduced audiences to Clarice Starling and Dr. Hannibal Lecter, a character that has continued to haunt pop culture even 25 years later. Not only has the story of Hannibal continued (in sequels like NBC's Hannibal), but so many The Silence of the Lambs parodies have sprouted up over the years, showing the lasting influence of the movie.

Released back in 1991, The Silence of the Lambs is based on the novel of the same name by Thomas Harris and follows Starling, an F.B.I. trainee who must seek out the advice of known cannibalistic killer Hannibal in order to track down another killer, known as "Buffalo Bill." The movie won five Oscars, including ones for Best Picture, Foster, and Hopkins. The film contained so many quotable lines and notable scenes — "Hello, Clarice" and the "Buffalo Bill" dancing scene — so naturally pop culture would find ways to reference and parody them.

Check out some of The Silence of Lambs parodies below to see the movie's enduring influence.

1. The Silence Of The Hams

This 1994 spoof comedy movie parodies many horror movies, The Silence of the Lambs, Psycho, and even Michael Jackson's "Thriller" video.

This 2005 off-Broadway musical parodied the Oscar-winning film and has many song titles that reference famous lines from the movie, like "I'd F*ck Me" and the song above.

Back when spoof movies were all the rage, this 1993 comedy took aim at poking fun at the Lethal Weapon movies, as well as Die Hard, Dirty Harry, and this scene, obviously inspired by The Silence of the Lambs.

Jay declares his boredom in the above scene and then starts doing the Buffalo Bill dance scene to "Goodbye Horses" — with hilarious results.

Ah, the simple days when comedian Billy Crystal would host the Oscars and consistently knock it out of the park. Above, he makes his grand entrance into the ceremony as none other than Hannibal Lecter.

More like this
Keke Palmer Hopes 'Lightyear' Will Help “Normalise” Same-Sex Relationships
By Sam Ramsden
All The Sneaky Lindsay Lohan Movie Easter Eggs In Her New Ad, Explained
By Stephanie Topacio Long
The 'Hocus Pocus' Sequel Finally Has A Release Date & It Makes Total Sense
By Shannon Barbour and Radhika Menon
Everything To Know About 'My Big Fat Greek Wedding 3'
By Grace Wehniainen
Get Even More From Bustle — Sign Up For The Newsletter