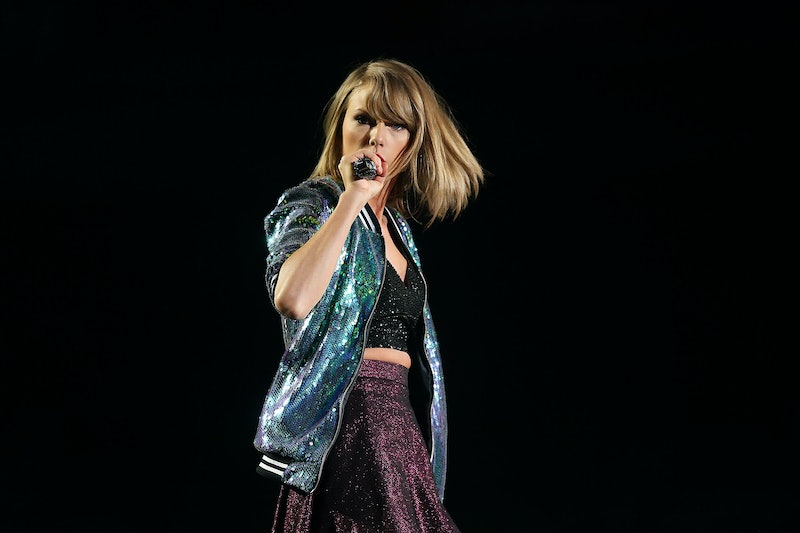 Like most of the rest of the world, I spent a few hours on Thursday afternoon parked in front of my laptop for the unveiling of Yeezy Season 3, Kanye West's new fashion collection. The event featured 1,000 models, lots of celebrities in the audience, and perhaps most importantly, the premiere of West's new album, The Life Of Pablo . However, as West played the tracks to the 20,000 member audience and the millions streaming the show worldwide, one thing became clear: some of his lyrics are extremely problematic. In particular, his track "Famous" features incredibly misogynistic lyrics about Taylor Swift, in which West raps: "I feel like me and Taylor might still have sex/ I made that b*tch famous." Those words are incredibly inappropriate and downright offensive, and understandably, Swift does not approve of the message of West's "Famous". Who could blame her?

While Swift's brother Austin spoke out against the lyrics yesterday, posting a video to Instagram in which he was throwing his Yeezys in the trash, a statement from Swift herself (via her rep), didn't come until a bit later. Perhaps unsurprisingly, she was never contacted about "Famous" before it was recorded/premiered to approve the lyrics, but that West had hoped she'd share it via her social media channels, which she declined for what are now rather obvious reasons.

“Kanye did not call for approval. But to ask Taylor to release his single Famous on her Twitter account. She declined and cautioned him about releasing a song with such a strong misogynistic message. Taylor was never made aware of the actual lyric, ‘I made that bitch famous.'”

The tone deaf nature of West's request for Swift to share "Famous" to her considerable social media followers when the song contains defamatory lyrics about the singer is a perfect example of his overall ignorance. For all of West's artistic brilliance, his inability to grasp the reality of his art in the context of the world around him makes me sad. Is West a talented artist with things to say? Without a doubt. Does he get so caught up in artifice and ego that he can't actually find a good way to say them, instead copping to easy and immature jabs just to get people talking? More often than not.

The truce between Swift and West has been tenuous at best since their infamous MTV Music Video Awards beef back in 2009, but they seemed to have turned a corner in recent years. Swift was even chosen to present West with his Video Vanguard Award at the 2015 ceremony. Now it seems any progress in their understanding and appreciating one another's unique niches within the music industry has been undone, and with it, much of my own respect for West, as well. Maybe somehow he can find his way back to the greatness he seems so desperate to embody, but in order to do that, he'll need to let go of his own ego a bit first.