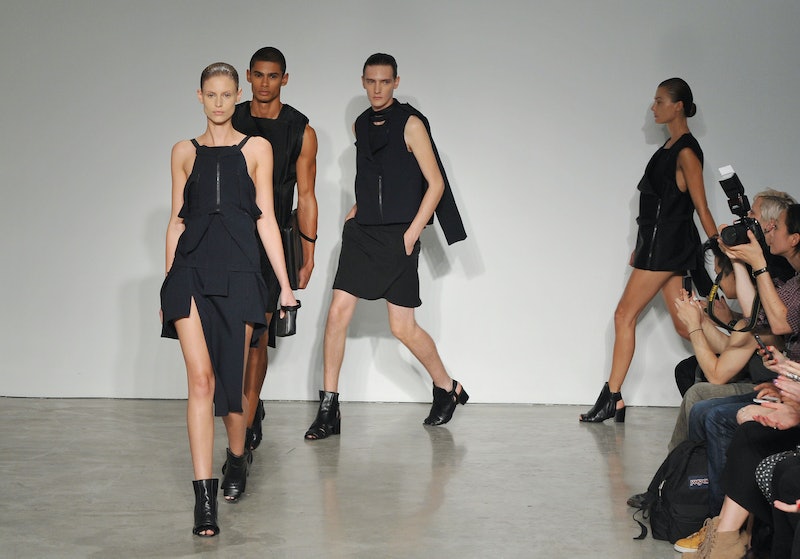 We usually know what to expect from couture. Ball gowns, sky-grazing hairpieces, zombie ballerinas, and... genderless clothing? Okay, so maybe we weren't expecting that one. Rad Hourani has delivered the first-ever unisex collection to be recognized as couture — which is kind of a win. It's about time couture got a bit more progressive.

Rad Hourani is Canadian-born, although he has lived in Paris for the past eight years. He founded his label RAD in 2007, with a small showing at an art gallery. His brand has grown considerably since then. Hourani has perfected the art of the androgynous silhouette, with clothing that pays homage to both masculine and feminine concepts.

Didier Grumbach, the president of the Chambre Syndicale de la Haute Couture invited Hourani onto the couture schedule this year, making him the first designer in history to show a unisex collection at Couture Fashion Week. This is a pretty uncharacteristic move for the historically stuffy world of couture, especially in Paris.

Sydney Toledano, president of Christian Dior, mentored Hourini in preparation of his first collection with the Chambre, but that hasn't altered his aesthetic much. The designer experimented with an all-black color palate for the first time, thus highlighting the unisex nature of the clothing.

Unisex couture comes at just the right moment, with androgyny seeping into mainstream consciousness as a fashionable way of dressing. However, the designer is quick to point out that androgyny and unisex are not the same thing. “Androgyny is a style,” he said. “Unisex is erasing all limitations.”

Hourani's designs succeed in blending those limitations, if not eradicating them entirely. We see a melding of traditionally masculine and feminine silhouettes: sharp jackets and leather leggings meeting softer jumpers. There is even a jacket that can transform into, among other things, a backpack and a corset. So is unisex the future of couture? Time will tell.