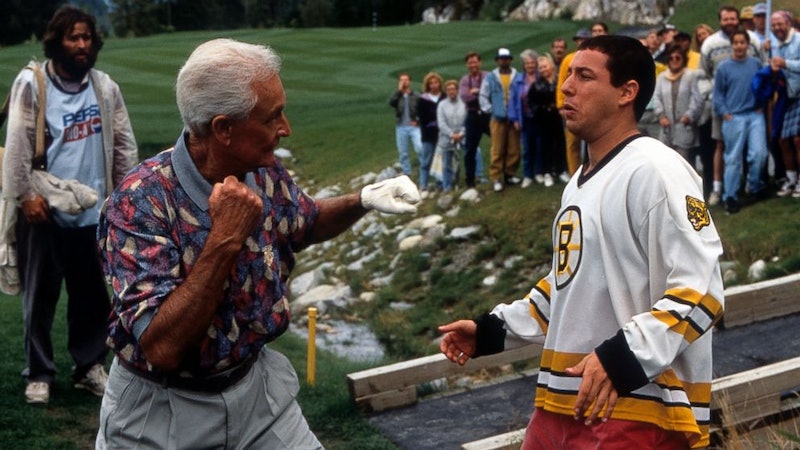 Well, well, well: Today marks 20 years since Happy Gilmore was released into theaters, and I'm celebrating this milestone by rewatching the film and talking about all the things I never noticed. Throughout the '90s, Happy Gilmore was played repeatedly on my VHS player (along with Billy Madison). In fact, they still play the movie on TV so much, you can probably remember the last time you watched it. Well, the last time I sat down and watched the hockey-loving, angry golfer was in high school. So, for me, I noticed a ton of things from the film that I definitely never realized before.

It may have been 20 years ago, but Happy Gilmore has not lost it’s humor over the decades. In order to save his grandma’s home from being repossessed by the government, Happy Gilmore joins a golf tournament and ends up becoming the new must-watch player of the year — of course it’s his uneven temper as well as his long-range skills. Meanwhile Shooter McGavin is trying to get him kicked off the tour so he can win his gold jacket. Guys, re-watch Happy Gilmore. It’s worth it. Here are 11 things I never noticed about the film when I was younger.

If you so happen to be a Good Wife fan like me then Shooter McGavin will look pretty familiar. He's been playing Judge Don Schakowsky, Alicia Florrick's nemesis throughout the current season. Not to mention he's also been in Boardwalk Empire, Rumor Has It…, Requiem for a Dream and many more things over the years.

2. The Casual Death In The Opening Credits

Maybe it's because whenever I watch Happy Gilmore it's on TV but his father's untimely death in the opening credits was a surprise to me. I totally forgot they explain Happy's entire back story in the first few moments

The whole movie is a giant product placement ad by Subway and AT&T.

Oh, hello Claire from Modern Family. Who knew that she once locked lips with Adam Sandler before she found Phil Dunphy.

Remember pay phones? Kids today don’t even know what a collect call is.

I also forgot that Ben Stiller pretty much plays the best character of the movie. I didn’t forget that he was in the movie, but I definitely forgot how good he was. "You could trouble me for a warm glass of shut the hell up!"

In case you didn't notice, most of the things I didn't realize until I re-watched are the famous faces. How I Met Your Mother fans will recognize the moving guy as Doug the Bartender at MacLaren’s. Will Sasso is a pretty famous comedian these days.

Who is this guy anyways? Why is he watching them make out on to “Endless Love”?

Although he's hidden under a bush of a beard, Otto is one of Sandler's real-life pals who pretty much shows up in every film of his to this day. Grandma's Boy, anyone?

9. Kevin Nealon In Happy Gilmore Is Literally The Same In Grandma’s Boy

Speaking of Grandma's Boy, Kevin Nealon pretty much plays the exact same character in this that he does in the video game film as the boss Mr. Cheezle.

“Guns don’t kill people, I kill people.” How did I never notice this large man’s shirt?