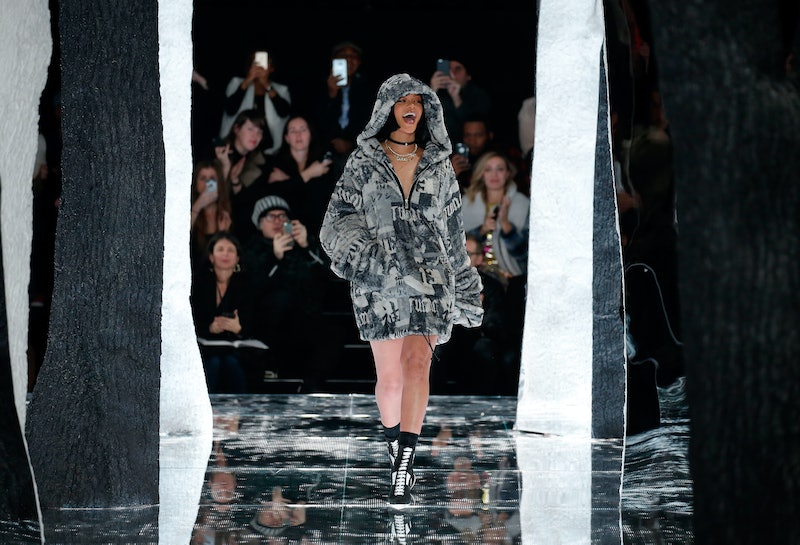 The ever stylish Rihanna has basically been a fashion icon ever since she chopped her hair into that pixie so many years ago. Several years later, after countless stunning red carpet appearances and an infinite number of perfect street style ensembles, the singer has finally made her New York Fashion Week debut as the creative director for FENTY PUMA. Friday night, a series of top models walked the runway for FENTY PUMA by Rihanna in extravagant street wear in front of a star studded front row, that included Naomi Campbell, Jeremy Scott and of course, Anna Wintour.

Naturally, Rihanna's collection for Puma featured a very chic color palette of white and black, which worked well for the distressed, oversized sweats that many of the models wore on the runway. What caught most people's attention, however, was the eccentric hair and makeup that Rihanna chose for the show, as executed by famed makeup artist Pat McGrath.

The cast of it-girl models, including Gigi Hadid, Lexi Bolling, Taylor Hill, Imaan Hammam, Ana Cristina and Sarah Brannon, had the roots of their hair, their brows and their lashes painted a stark white while also rocking black lipstick — a look that could really only be pulled off on Rihanna's stage.

Because of the dramatic hair and makeup, the star-filled front row, the all-star model cast and of course, the insanely awesome streetwear on display, people had plenty of things to say about Rihanna's New York Fashion Week debut for FENTY PUMA. The general public took to Twitter to express their feelings and we must say, the reactions and descriptions were totally relatable.

Could not agree more with the last tweet. Money is no object, these models look dope and I will do whatever it takes to acquire this collection. (Disclaimer: help me I'm poor, but I will admire the collection from afar).

Throwing Some Shade At Yeezy

Some People Just Couldn't Keep Up

But it doesn't matter, because they love Rihanna anyway. Also, if I didn't work in fashion I would probably be confused about the words "fenty puma" being used everywhere all of a sudden.

It's not that we all want to follow Rihanna blindly, but...

Rihanna Can Make Anything Cool

If sweatpants are cool again I will be one happy girl.

But Some People Didn't Like The "Gothic Ice Queen" Look

Sometimes You Just Can't Prepare Yourself

Willing to bet that "slay" was one of the most used words in association with FENTY PUMA.

More like this
Doja Cat Wore Surrealist-Inspired Schiaparelli To The BBMAs
By Dominique Norman
14 Spicy Bralette Outfits For Vaxed Girl Summer, Round 2
By Avery Matera
Rihanna Wore A Sparkling Lingerie Look For Date Night With A$AP Rocky
By Allie Fasanella
Machine Gun Kelly Wore A $30K Diamond Mani To The BBMAs
By Paris Giles
Get Even More From Bustle — Sign Up For The Newsletter