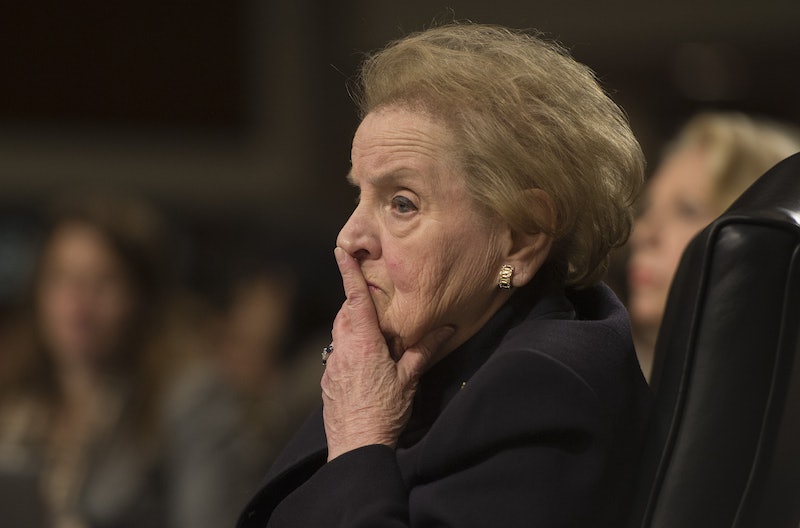 Although she's already stumped in New Hampshire for her fellow former Secretary of State, Madeleine Albright explained her Hillary Clinton support in The New York Times in an op-ed on Friday. As to be expected from Albright, the op-ed was eloquent and clever, using as a jumping off point her iconic (that descriptor may not even do it justice) quote: “There’s a special place in hell for women who don’t help each other.” The ostensible purpose of the piece was to contextualize how she applied that quote on the campaign trail for Clinton and dismiss any notion that she thought women who supported Bernie Sanders would be relegated to some fiery abyss.

So, thanks for clarifying that, Albright. I am sure those voters are much relieved.

In all seriousness, Albright, like many other Clinton supporters, may have sensed that some segment of Democratic women weren't connecting to her campaign. In fact, lacking a connection to Clinton's campaign wasn't even really the problem; some were feeling alienated or exploited by Clinton supporters who, at times, appeared as if they were attempting to guilt young women into voting for her. It's not simply that Clinton isn't wooing the young women with the snap of her fingers like many once thought she would. It's that the efforts to win them now come off as patronizing, condescending, and shaming at times.

As a result, whether women — specifically feminists and, even more specifically, young feminists — will or should vote for Clinton has become a highly charged, highly polarizing issue in this election. Look at the fracas over Gloria Steinem's comments last week. It's the only proof one needs to see how loaded this topic has become.

What is less talked about, though, but more disconcerting is the notion not that feminists should feel some sense of duty to vote for Clinton but that having her in the White House would instantly solve all problems related to sexism. In her op-ed, Albright brought up a number of obstacles facing women in 2016 to emphasize that there is still much more the feminist movement must accomplish in the United States.

To this day, I sometimes feel a squirm of anxiety when I interrupt a discussion in a room with only men. I see women in public office being criticized on television for their hairstyle or tone of voice. And I regularly hear successful businesswomen criticized as 'too emotional.'

It's not that Albright is wrong bringing up these problems, but she is wrong to imply that Clinton becoming president, or any woman becoming president, would solve them — or, for that matter, significantly improve the situation for women in the workforce. These issues Albright cites are a result of deeply-entrenched stereotypes of and biases against women. Thinking that Clinton's presidency would be a magic wand to these complicated, long-simmering results of sexism is as simplistic and misguided as thinking Barack Obama's presidency would solve all the country's problems with racism.

Furthermore, there's something disappointing about reading that Albright, a woman who regularly meets on equal, or superior, ground with the top world leaders, stills feels a "squirm of anxiety" to merely "interrupt a discussion in a room with only men." At what point, is the onus on women, and not just role models like Clinton and Albright, to remind ourselves not to feel that "squirm of anxiety," and face that room of men head-on, as we very well know we are capable of doing?

And if Albright, after such a long and esteemed career that has garnered her global respect, still feels discomfort in that room full of men, then we know there's a lot of work to be done to fight sexism — and a Hillary Clinton White House won't simply fix it.