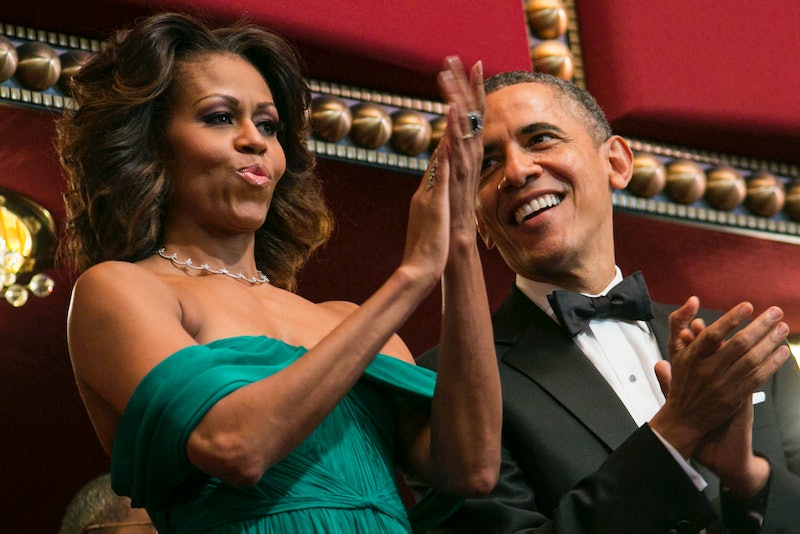 Sometimes, the lovey-dovey relationship between the Obamas seems like it can't get any more perfect. And then Michelle goes and reveals the Obamas' Valentine's Day plans to Ryan Seacrest — or rather, their lack of plans. The First Lady told Seacrest that their Valentine's Day will probably be "low-key," which is completely acceptable for people who've been married for 21 years. The first lady, who received a rousing bipartisan standing ovation at the State of the Union address on Tuesday, says that she's not expecting her husband to surprise her with any big plans on Feb. 14 — especially since he just threw a big bash for Michelle Obama's 50th birthday.

So what does a "low-key" Valentine's Day look like for the president and his wife? Maybe a specially prepared dinner and a movie (or, as The Hill notes, they could actually be headed to sunny Southern California on Feb. 14, where Obama is scheduled to meet with King Abdullah of Jordan. Really romantic, Barry).

The first lady did say that the president never forgets a birthday, anniversary, or Valentine's Day, earning him major brownie points. Last year, Obama apparently took his wife out to dinner at a posh D.C. restaurant Minibar — which seats only 12 people — and the bill easily could've added up to $900.

Seacrest asked if the president would be as befuddled about ordering flowers as Michael Douglas' character was in the movie The American President. But Michelle says that part in the movie is far from reality — at least, the White House's reality:

This is the thing about that movie,” the first lady said. “Once you live in the White House, you know there’s a florist in the White House. It’s like, they have really good flowers right downstairs, so why is he out there with his credit card? That would never happen!

During the interview with Seacrest, Obama spoke about healthcare reform and the four-year anniversary of her Let's Move campaign (she'll be appearing during this year's much-anticipated Puppy Bowl with Bo and Sunny as part of the initiative). She also opened up about the first family's home life, her exercise regimen, and the dating prospects for her daughters. The first lady admitted that she and Barack haven't talked about their game plan for when Sasha and Malia start dating, but that they'll cross that bridge when they get to it.

She also remarked that her kids didn't really show too much concern for their dad when he got his "butt kicked," presumably referring to the Healthcare.gov rollout debacle.

“I’m surprised at how little they care about our days,” she says. “They want to talk about their lives and what they’re going through.”

More like this
Michelle Obama Opened Up About The "Discord And Discomfort" Of Marriage
By Stephanie Topacio Long
Jodie Turner-Smith & Joshua Jackson's Relationship Timeline Includes Her Proposing
By Jake Viswanath
J.Lo Wants To Make A Sequel To This Movie With Ben Affleck
By Jake Viswanath
Hugh Jackman Shared The Sweetest Tribute To His “Extraordinary” Wife
By El Hunt
Get Even More From Bustle — Sign Up For The Newsletter