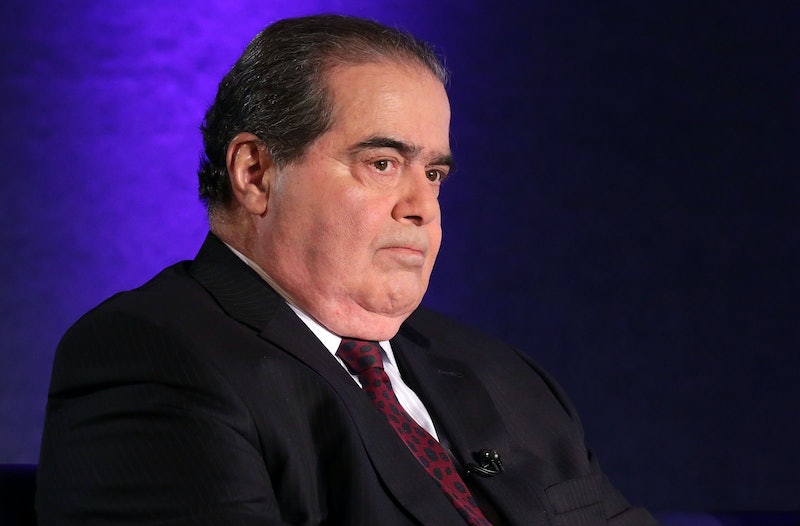 On Saturday afternoon, Supreme Court Justice Antonin Scalia died at age 79. His body was reportedly discovered in his hotel room at a resort in West Texas, after the longest-tenured justice on the bench didn't show up to breakfast. His unexpected death has sent shockwaves through the national media and the political world, and it's naturally raising some forward-looking questions. For instance: what cases was Scalia working on when he died, and will their outcomes be affected?

When the Supreme Court hears a case, they don’t release their ruling immediately afterwards. That process of considering, deciding, and writing up the respective opinions of the court can take months, which means when a justice unexpectedly passes like this, there are invariably going to be cases they heard that were never resolved.

For example: while some of the cases the court heard during its October 2015 term have already been decided ― like EnerNOC v. Electric Power Supply Association , Shapiro v. McManus, and Duncan v. Owens to name a few ― a whole slew of them haven’t. Out of the 40 cases the Supreme Court has heard since October, according to the exemplary SCOTUSBlog, only 18 have already been decided.

There are some really big cases that could be coming up soon, as well ― take United States v. Texas , for example, a state-level challenge to the Obama administration's deferred action program for undocumented immigrants. That case isn't yet scheduled, but depending on how long it takes for the Senate to confirm somebody new (especially considering there are already rumblings that the Republicans might try to freeze out Obama's pick until he's out of office next year), that case might be heard with just eight justices rather than the usual nine.

Similarly, and perhaps even more urgently given that it's already schedule for oral arguments on March 2nd, you've got Whole Woman’s Health v. Hellerstedt, which is a massively important case for reproductive rights. The case will challenge the state of Texas' heightened, often prohibitive new regulations on abortion clinics in recent years, often referred to as TRAP laws by their critics (targeted regulation of abortion providers). Specifically, the outcome of that case will determine whether the state can enforce it's requirements that abortion providers have admitting privileges at nearby hospitals, or meet the minimum standards of an ambulatory surgery center.

The upshot is that without Scalia on the bench, and for as long as the GOP-controlled Senate refuses to appoint whoever Obama ends up nominating (if indeed they try to stonewall), both of these cases and any others that come before the court will be ruled on by just eight justices. If there are only eight justices, there's a very good chance you'll see some tied decisions ― and in the event of a 4-4 split, it's effectively as though the Supreme Court never heard the case.

No sweeping decision, no new precedents, nothing. Instead, any lower court ruling on the case continues to stand. In the cases of United Staes v. Texas and Whole Woman’s Health v. Hellerstedt, this would effectively mean rulings against Obama's deferred action program, and upholding the bulk of Texas' restrictive abortion laws.

Simply put, it'll be as crucial an issue as anything to see when Scalia is replaced, and how the court will shake out in absence of that crucial ninth vote. Because as it stands now, it looks like a lot of high-profile Supreme Court cases could be effectively rendered moot.