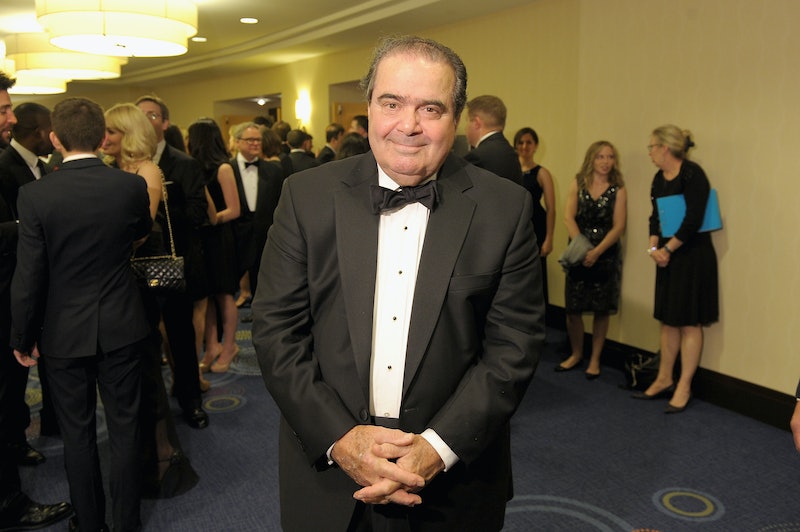 After reportedly spending the day quail hunting at Cibolo Creek Ranch on Friday outside of Marfa, TX, ABC reports that Supreme Court Justice Antonin Scalia died in his sleep Friday night. CNN reports that a government official told them that Scalia had complained of feeling ill to friends before heading to bed on Friday. How did Scalia die? My San Antonio, a local website, reports that he died of natural causes in his sleep. CNN says he was found unresponsive on Saturday morning. Update: A Presidio County judge confirmed Sunday afternoon that Scalia's official cause of death will be listed as a heart attack. Judge Cinderela Guevara said she spoke with Scalia's personal doctor, who reportedly told her that he had suffered multiple chronic ailments and had recently had a shoulder issue and underwent an MRI.

My San Antonia reports: "Scalia arrived at the ranch on Friday and attended a private party with about 40 people. When he did not appear for breakfast, a person associated with the ranch went to his room and found a body." The Daily Mail reports that the US Marshal Service, the local sheriff's department, and the FBI will be investigating his death. As of now, there's no foul play suspected. The Marshal was reportedly on site because oftentimes they travel with Justices.

Texas Gov. Greg Abbott released a statement: "We mourn his passing, and we pray that his successor on the Supreme Court will take his place as a champion for the written Constitution and the Rule of Law."

Scalia was the Supremes most conservative leader and was vehemently against gay marriage and called the decision to allow same-sex marriage a “threat to American democracy.” The seat he's left behind might possibly go to Sri Srinivasan, an Obama appointed judge.

More like this
Michigan’s Governor Is “Going To Fight Like Hell” To Protect Abortion Access
By Andrea Zelinski
How To Fight For Reproductive Rights, Based On How Much Time You Have
By Courtney Young
President Zelensky Spoke Out On Ukraine's Chances Of Hosting Eurovision Next Year
By Sam Ramsden
Rebekah Vardy & Coleen Rooney’s Trial Has Officially Begun
By Bustle UK
Get Even More From Bustle — Sign Up For The Newsletter