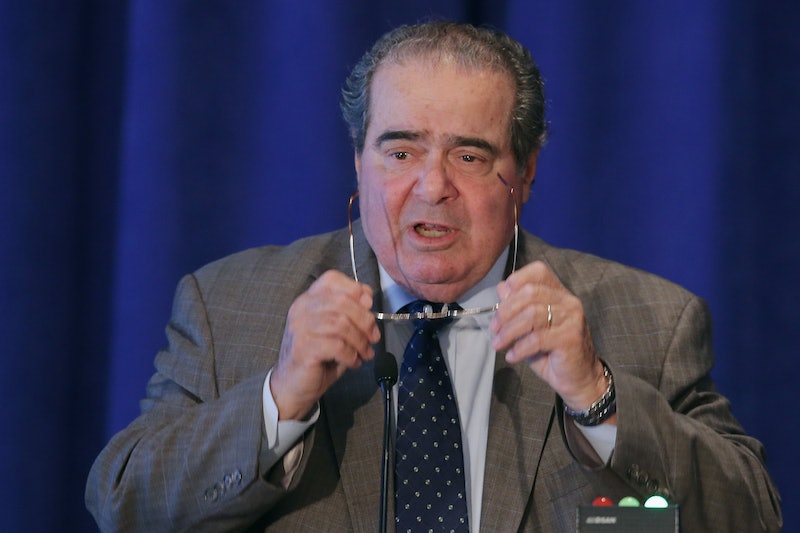 On Saturday one of the most memorable and charmingly caustic people to serve on the highest court in the land, Supreme Court justice Antonin Scalia, died at the age of 79. Nominated by Ronald Reagan in 1986, Scalia served on the Supreme Court for nearly three full decades. During his tenure, Scalia developed a reputation for his highly conservative views and expressing them in provocative ways.

On that front, he killed two birds with one stone when he denounced the Supreme Court's rulings in favor of ensuring gay rights. This past November at a talk for law students at Georgetown University, The New York Times reported that Scalia criticized the Supreme Court's efforts to protect the rights of gay people as a "deserving minority" because “What minorities deserve protection? ... What about child abusers?" Clearly, Scalia had a flair for the controversial, especially when it came to using shocking examples to make a point.

However, while many will remember Scalia for his stalwart conservative political views or his, at times, outrageous outspokenness, the Supreme Court justice's most significant stamp on legal history was his commitment to advancing originalism, a framework for interpreting the U.S. Constitution from the perspective of how the Founding Fathers intended it to be.

As an originalist, Scalia did rule in favor of conservatives on a number of issues before the Supreme Court, but he did not treat his commitment to originalist constitutional interpretation as commitment to championing the right-leaning side in all cases. For example, Scalia played an important role in striking down the criminalization of flag burning, a subject on which he aligned with his liberal Supreme Court peers. Scalia also disagreed with his conservative colleagues on the issue of whether police may collect DNA samples after people have been arrested. Dissenting from the ruling that declared the practice to be constitutional, Scalia stated:

The proud men who wrote the charter of our liberties would not have been so eager to open their mouths for royal inspection.

It wasn't merely that Scalia was such an ardent proponent of originalism but that he was so in such a smart, articulate way. “My burden is not to show that originalism is perfect, but that it beats the other alternatives," Scalia said when he spoke at the University of Virginia, adding wryly, "and that, believe me, is not difficult." In fact, it is quite difficult. But even those who disagreed with Scalia can admit he carried his burden quite successfully.