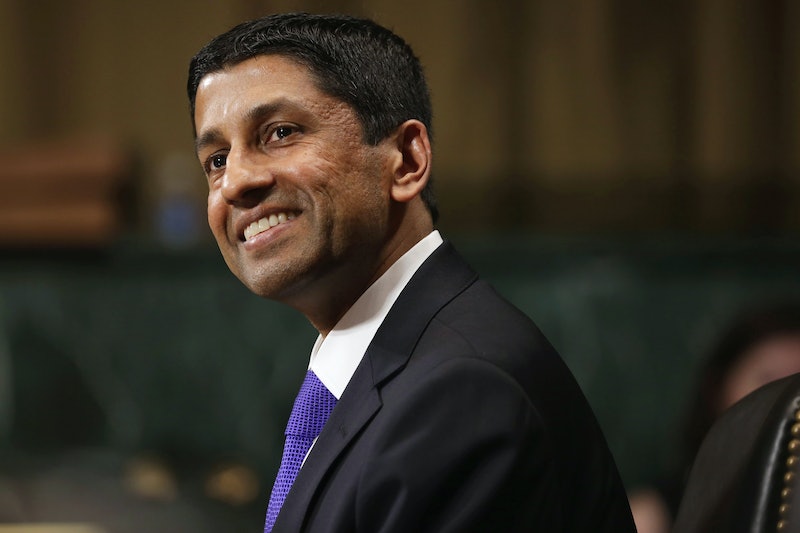 Senior U.S. Supreme Court Associate Justice Antonin Scalia was announced dead on Saturday, Feb. 13. Details of the cause of death are still emerging. However, soon after the announcement of Justice Scalia's death, people are already starting to think about replacements to take his spot in the Supreme Court. More specifically, the name Sri Srinivasan — a government lawyer for the United States Court of Appeals in the D.C. Circuit — has been brought up in the wake of Scalia's death. As people are trying to comprehend the loss of Justice Scalia, many are left wondering who is Sri Srinivasan? Update: According to the New York Times, Obama has indicated that he plans to choose Scalia's replacement promptly.

USA Today, The Atlantic, ThinkProgress, The New Yorker, and many more have reported that Srinivasan is among the names being thrown around as a front-runner to take Scalia's seat. It's time to find out more about him.

Srinivasan was the first Asian American and Indian American to serve of the Court of Appeals in the D.C. circuit. President Obama nominated Srinivasan to sit on the Court of Appeals, which is the second most powerful court in the U.S. With a background as a litigator, there has been criticism that much of Srinivasan's career was spent defending others' views rather than his own, which could have been problematic as a government lawyer, according to Mother Jones.

However, Srinivasan proved his qualifications as a lawyer when he argued for same-sex marriage in front of the Supreme Court in 2013. This was a big win for Srinivasan that showed others he could be fit to serve on the Court, and now some are looking to him as a possible replacement for Justice Scalia.

The D.C. Circuit Court of Appeals has been a sort of launching pad for Supreme Court Justices in the past; Clarence Thomas, John Roberts, Ruth Bader Ginsburg, and Antonin Scalia all got their start there before serving on the Supreme Court. That means that Srinivasan, with experience on the D.C. Circuit and a strong background in litigation, could end up as Scalia's replacement.

With nearly a year left in office, Obama will likely nominate someone to replace Scalia, rather than simply conceding to Republicans who will want to expedite the replacement process and try to force Obama into confirming their nominee. Because of this, Srinivasan, who has been seen as a possible next SCOTUS nominee since 2013 and who has a relationship with Obama, has been pushed to the forefront of the news as the possible replacement for Justice Scalia.