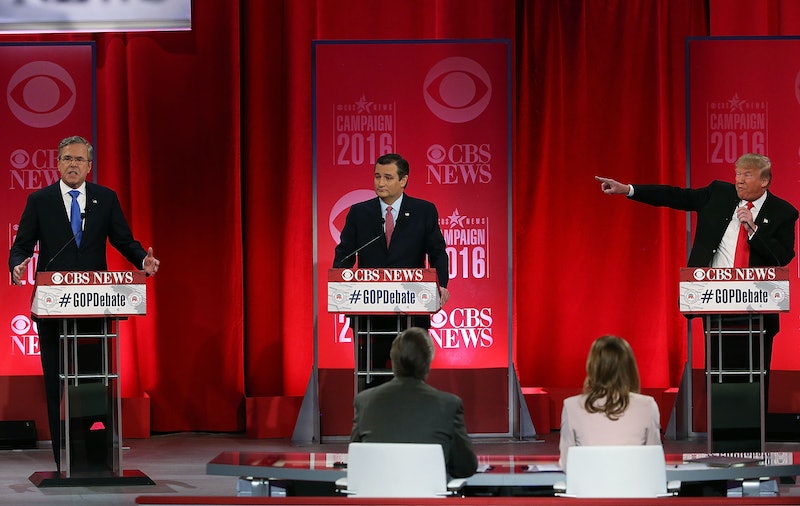 The ninth GOP debate has been an incredibly heated affair, with emotions running high following the sudden death of U.S Supreme Court Justice Antonin Scalia. Candidates have paid tribute to the Associate Justice while also answering questioning on foreign policy and economics posited by moderator John Dickerson. Republican frontrunner Donald Trump was on his most bombastic behavior yet again, boisterously calling out foreign countries like China, Mexico, Vietnam, and Japan for luring American companies overseas and promising to return jobs to the U.S. He earned a bit of favor from the crowd with those remarks but not everything the Donald said was met so positively. Why was Donald Trump booed during the GOP debate?

The candidate once again faced off against fellow candidate Jeb Bush and it is during this exchange that Trump began to be booed by the audience in attendance at the Peace Center in Greenville, South Carolina. Trump was called out by Bush after the former Florida governor once again questioned Trump's ability to govern as well as address major diplomatic matters. Bush questioned the Donald's support of Russia in regards to fighting ISIS. Trump shot back, stating that Bush had lied, and immediately was met with boos from the debate crowd. Trump once again questioned the audience's support, insinuating that those jeering him were lobbyists.

This wasn't the only time that Trump was booed for his comments about Bush. During a particularly emotional answer from Bush defending his brother's record as president, Trump butted in to blame George W. Bush for the 9/11 attacks, stating that he should've listened to repeated warnings that the CIA reportedly had given the commander in chief prior to the tragedy. "The World Trade Center came down during your brother’s reign," Trump roared, shocking the audience and eliciting more boos.

In between the war of words unfolding from Trump and Bush, Marco Rubio and Ted Cruz had a similarly heated exchange about immigration. Trump was once again booed when the time came for him to expound on his highly contentious immigration policy in which the Donald has continued to promise that he will build a wall between the United States and Mexico that would be paid for by our neighbors to the south. The real estate mogul shrugged off the audience response, instead congratulating himself for bringing such an important issue to the table. Trump wasn't the only candidate booed this evening, as Rubio and Cruz appeared to receive jeers during their argument as well. Still, it comes as a shock that this intense GOP debate audience would be so vocally opposed to the Donald. It's clear that the candidates came to play, as did those in attendance.