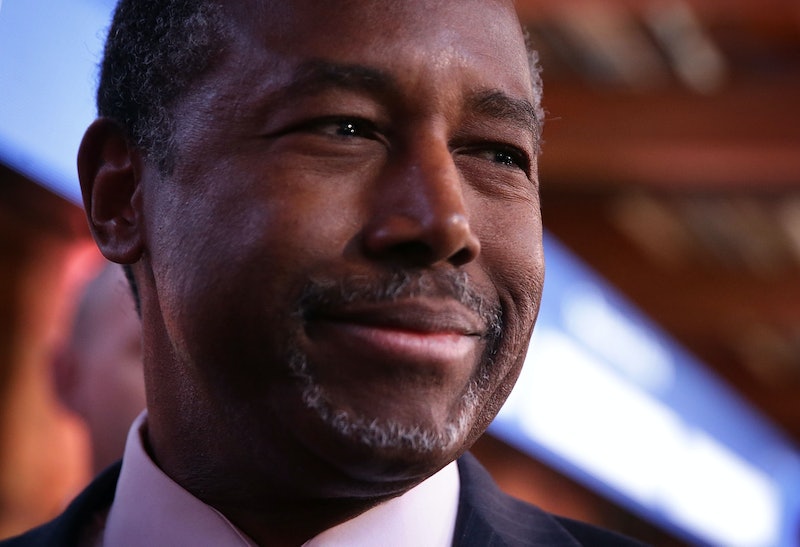 On Saturday night, the Republican candidates met for the ninth time, facing off on CBS News in the final debate before the South Carolina primary. And there was a lot to take in, as contentious as it was ― Donald Trump and Jeb Bush ripping into one another, Ted Cruz and Marco Rubio doing a little of the same, John Kasich trying to look oh-so above it all. And one of the six candidates, simply put, looked like a dead man walking: will Ben Carson drop out before South Carolina?

Make no mistake, if you watched the debate, you didn't see a whole lot of Carson. He's had at least one fair gripe in the debates so far, and it's that he hasn't gotten a lot of time to speak ― in the eighth debate, he spoke less than any other candidate, despite (at the time) outpolling Jeb Bush, John Kasich, and Chris Christie.

And that didn't much change on Saturday. While the exact numbers haven't been reported yet, even a casual observer could notice that he wasn't doing much. It's a fact that was hammered home, frankly, by every time he did speak ― those moments when you'd remember, "damn, Ben Carson is still in the race?"

And when he did talk! Oh man. The picture embedded above is actually kind of misleading, because even as unremarkable as it is, it makes him look considerably more engaged, assertive, and in-the-hunt than he actually did at any moment. And he wasn't exactly on-point with his words, either ― beyond even his typical halting, unsure, soft rhetorical style, he concluded the night by dropping an ominous Joseph Stalin quote that's seemingly made up, the stuff of conservative Facebook memes and fever dreams.

So, here's the basic score. Carson lost big in Iowa (with a helping hand from some classic "dirty tricks" by the Cruz campaign). He lost really big in New Hampshire. And judging by the polls right now, he's heading for yet another shellacking in the great state of South Carolina ― he currently trails the frontrunning Trump by a staggering 30 points, and he's in sixth place out of the six remaining candidates who were on the stage Saturday night.

Simply put, Carson dropping out of this race isn't a matter of "if," it's a matter of "when." It's frankly pretty surprising that he's persevered this long at all. Maybe his status as the ultimate political outsider also gave him a wild-eyed optimism that the more experienced also-rans like Chris Christie, Mike Huckabee, Carly Fiorina and Rand Paul can't match? At this point, it seems altogether likely that he'll hang around through the South Carolina primary ― why spend the extra money and go to the debate otherwise ― but if you're wondering which candidacy is the next one on the chopping block, keep yours eyes on Team Carson.