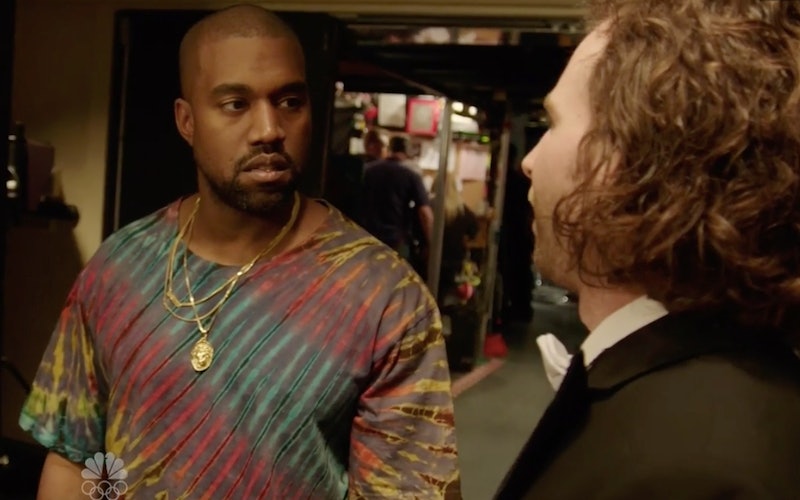 When I first heard that Kanye West was the musical guest on this week's Saturday Night Live, I was certain he wouldn't participate in any of the sketches. I mean, just look at the trailer for the episode, in which Kanye doesn't smile and literally doesn't say a single word the entire time. Luckily, I was proven wrong, as Kanye joined Kyle Mooney for an SNL rap battle sketch! Yes, Kanye voluntarily participated in a comedy sketch. *gasps*

The entire sketch was basically Mooney's character going through life with a burning desire to have a rap battle against Kanye (as one does). Although Beck advised Mooney's character that it was a bad idea to challenge Kanye to an impromptu rap battle, he went for it anyway and caught Kanye off guard behind the SNL stage. "Yo, Kanye West, you need a mint for your Kanye breath," Mooney's character rapped to Yeezy himself. His rap wasn't all that good, especially considering the amount of time he prepared for it, but he was still hilarious, and in good spirit, Kanye rapped back. And so began the unforgettable rap battle between Kyle Mooney and *the* Kanye West on this week's Saturday Night Live .

Without warning, Kanye killed it with an awesome rap against Mooney's character (which seemed to be part of his new song "I Miss The Old Kanye"), who had no response. At the very end, in proper Kanye form, he rapped to Mooney, "Well guess what? I love you like Kanye loves Kanye." Swoon. After seeing Kanye take the stage twice and act in this sketch, I have to say, I love Kanye like Kanye loves Kanye. Check out the rap battle, aka the most important part of the sketch, below.