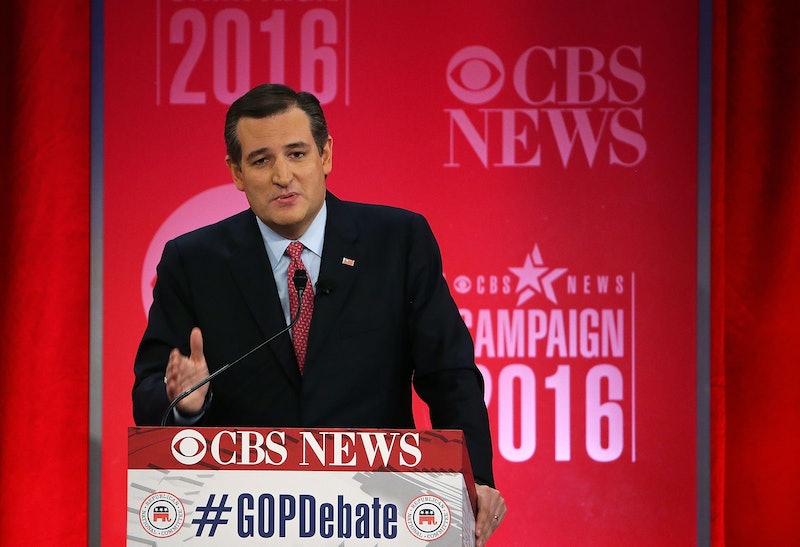 Calling him a "lame duck" president, Ted Cruz claimed that President Obama should not have the choice for the Supreme Court justice in the "waning days" of his presidency following Justice Antonin Scalia's sudden passing. During a segment on ABC's This Week Cruz claimed that he would filibuster any Supreme Court nomination President Obama makes to replace the Justice who died on Feb. 13. If a filibuster were to occur, it would prove the first officially successful attempt at filibustering a U.S. president's Supreme Court nomination, with some stipulations, though only few attempts have occurred in the past.

It is helpful to explain exactly what a filibuster — a maneuver for which Cruz is well-known — actually is: a filibuster is a political tactic in the legislative process, sometimes used by members of the U.S. Senate to block the passage of a bill. It does not exist in the U.S. House of Representatives because House rules limit the time for debate permitted on bills. It is interesting — and often a rather frustrating process — because essentially, once a senator is granted permission to speak by the presiding officer, that senator may speak indefinitely to delay or prevent a final vote on the bill in question. The filibuster can get halted, but in order to do so, the Senate must pass a cloture resolution by a three-fifths majority, as in many other cases of Senate disputes.

The last time discussion of this nature occurred, though unsuccessfully, was during Obama's presidency when the Republican members of Senate threatened to filibuster his last nomination of a justice after Justice John Paul Stevens announced his plans to retire back in 2010. President Obama's nominee, (now Justice) Elena Kagan, ultimately received her appointment without an attempt at filibuster. Five Republican members of the Senate supported her nomination, which preventing the option of a filibuster.

However, back in 1968, President Lyndon B. Johnson's attempt to raise Associate Justice Abe Fortas to chief justice nearly fits the proverbial bill. Fortas was a longtime friend of President Johnson's, and with President Nixon's impending inauguration, President Johnson wanted to replace the retiring Chief Justice Earl Warren with the best candidate he knew.

Of course, since President Johnson was a Democrat, Senate Republicans — as well as some conservative Democrats — took issue with his choice in nomination. They rallied against Fortas, citing his liberal record, and a series of argued conflicts of interest.

When his nomination reached the Senate floor, it was unclear whether he had enough votes to approve the nomination. Some called this a filibuster, since it was a delay by the Senate. After four days of debate, the Senate held a cloture vote and found 45 in favor, 43 against. Because 59 are required to proceed to a final vote — even though only 88 senators were present — the nomination was rejected. Many argue this was not an actual filibuster because it did not meet the official definition, though for all intents and purposes, it effectively served as one.

It appears that President Obama is trying to pick somebody with some qualities that will weigh in favor of progressivism, but with enough conservative characteristics so as to please the Senate Republican caucus. It seems an impossible task, but if it can happen, it would likely please Americans across the country. After all, any day without a filibuster from the Senate is a good day.