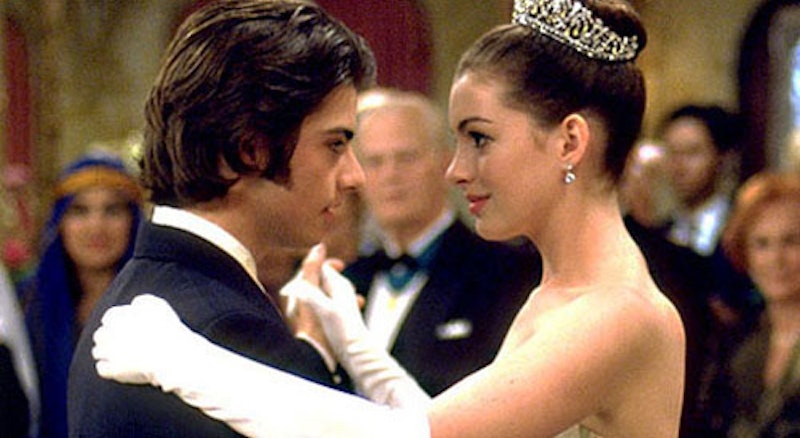 It's fact known by any kid of the early '00s: Michael Moscovitz was the perfect consort for HRH Amelia Mignonette Grimaldi Thermopolis Renaldo in The Princess Diaries. Remember when he saw her when she was invisible? And when he worked on her Mustang? And when they kissed and it made her foot pop? Swoon. Michael was the dreamiest, most musically-inclined, best M&M-on-a-pizza-putter a girl could want, way better than that meanie Josh Bryant (Erik von Detten) who was only using Mia for the fame, and so naturally, it's imperative to discover where Princess Diaries' Michael is today.

Don't worry fans, actor Robert Schwartzman is still doing his thing — and in this case, his "thing" is going solo from his band, Rooney, and hanging out with his famous relatives, as he relayed in a 2013 interview with Parade. Schwartzman is a member of the powerful Coppola family: Talia Shire is his mother, Francis Ford Coppola is his uncle, Jason Schwartzman is his brother, and Nicolas Cage and Sofia Coppola are cousins. Though the rest of his family is in "the biz", the youngest Schwartzman brother has always considered himself more of a musician, saying in an interview with Seventeen that "Really, it was all about my band even before I got the part in [The Princess Diaries]. I've always been real close to film world. I love film, and I will do things in film, but music is more satisfying. It feels more like me."

Princess Mia (less commonly known as Anne Hathaway) has gone on to star in many major film roles, from Andy in The Devil Wears Prada to Fantine in Les Miserables, and while her leading man has not skyrocketed into the public eye in the same way, he's clearly not bothered by it, and is enjoying his time in music. The LA-based Ronney rose to fame after becoming one of the first musical acts to appear on The O.C in the first season on an episode called “The Third Wheel". In fact, after the episode, the band reportedly received a 200 percent boost in album sales, according to The Daily Beast According to an interview with Huffington Post, Rooney, named after one of the goofiest principals of all time, Mr. Rooney from Ferris Bueller's Day Off, were signed to Interscope when Schwartzman was 19, and their songs appeared in everything from the Tiger Woods' PGA Tour 2004 video game to an episode of Gossip Girl.

But Schwartzman is not defined by the band. He not only went solo with his album Double Capricorn in 2011, but he's worked on many other projects, such as creating the score for the star-studded movie, Palo Alto, a film directed by his cousin, Gia Coppola. Another project? A startup called 22. With this app, artists can leave 22-second audio messages to update fans, rant, or do whatever they so desire, before fans can respond with another 22-second message. It's like Twitter, but more direct, and with voice-speak. In an interview with the Columbia Spectator, Schwartzman hyped up the app stating, "I wanted there to be a tool so that artists could have a voice component to all the other types of social media. I feel like, more than ever, there are a lot of times that artists aren't actually being represented on their social media pages, so fans never really know if they're talking or hearing from an artist they're following." Sounds good to me.

When Schwartzman isn't writing music or creating apps, his social media shows him hanging out with his dogs. According to National Geographic, he rescued a pit bull named Sandy from the side of the road, and while she has aggression issues, Schwartzman hasn't given up on her and even featured her in an episode of Dog Whisperer. He also volunteers with an organization called the Animal Hope and Wellness Foundation, a fact he shared with his Twitter followers. Apparently, whether he's playing Michael or being his regular self, Schwartzman is totally crush-worthy.

So sure, Michael didn't end up with Mia in the sequel to The Princess Diaries, but the actor who played him is killing the game. Schwartzman seems to be just as charming and princely as Michael is in the movie, which is something all fans can certainly appreciate.