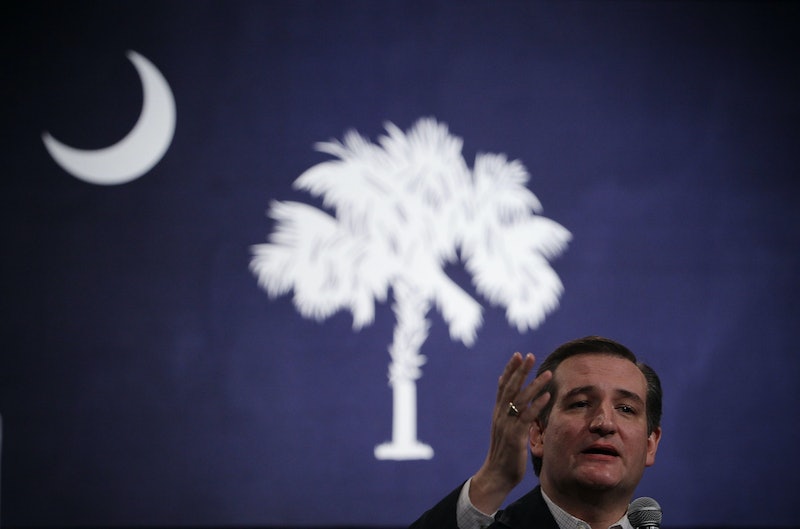 Unlike the other pre-Super Tuesday primaries, the Republican South Carolina primary features a hybrid system that isn't quite proportional awarding or winner-take-all. Whoever wins the statewide primary will win 29 of the state's 50 delegates. The 29 delegates come from the 13 (10 at-large and 3 for the party leadership) that every state gets, and 16 bonus delegates based on South Carolina's loyalty to the Republican party.

After that, the remaining 21 delegates are awarded by Congressional districts — three delegates for each of the seven districts. The regional system means candidates are focusing in on specific areas of the state, hoping to win those delegates. Jeb Bush is campaigning hard in the military-heavy southern part of the state, while Ted Cruz is expected to do well with the Evangelicals in the northern cities of Greenville and Spartanburg, just like his top place showing in Iowa. South Carolina's unusual primary system differentiates the Palmetto State from the other First Four voting states and gives it a special title in the primary season.

The system is simpler for Democrats, who will follow the same proportional system as New Hampshire for the South Carolina race. CBS News reported a new poll Sunday morning, showing Hillary Clinton at 59 percent and Bernie Sanders at 40 percent. If those margins hold until Feb. 27, Clinton will get 33 delegates, leaving Sanders with the remaining 23 pledged delegates. The state's three superdelegates, DNC state leaders Boyd Brown, Donald Fowler, and Kaye Koonce, have all already pledged their support to Clinton.

South Carolina rounds out the First Four in primary season before a huge chunks of the delegates are awarded on Super Tuesday. More than likely, the elections will give the front-runners even more of a leg up against their opponents, but anything is possible in an election cycle like this one. Until the final precincts report and all the delegates are awarded, there's hope for your favorite underdog candidate.