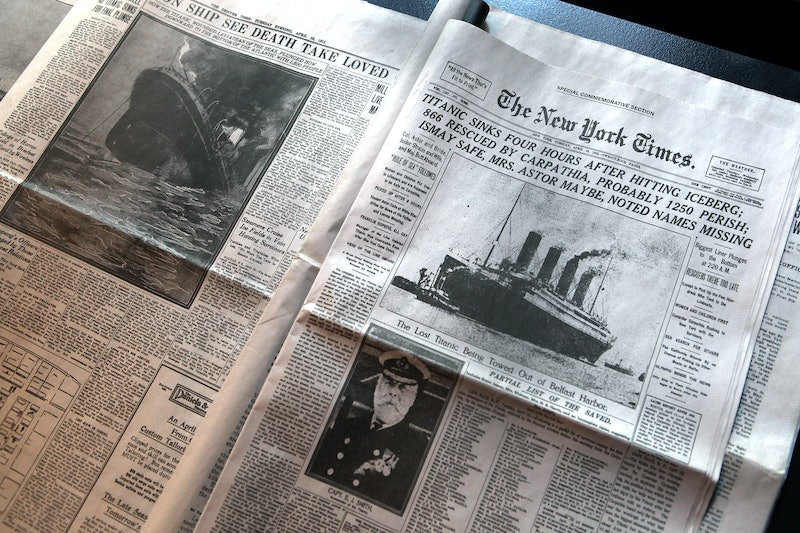 On Apr. 15, 1912, the famous British ocean liner RMS Titanic collided with an iceberg in the North Atlantic and sank two and a half hours later. It was one of the worst naval accidents in recorded history, and to this day the world looks back upon it with melancholy. The titanium ship carried 2,200-plus passengers and crew, making it one of the largest ocean liners in the world. It departed Southampton, England on its maiden voyage across the Atlantic on Apr. 10, 1912. It was designed by the Irish shipbuilder William Pirrie in Belfast, and at the time was potentially the world's fastest ship. It was 883 feet from stern to bow, and its hull was divided into 16 compartments, and because four compartments could flood without loss of buoyancy, the ship was presumed watertight. These realistic drawings from just after the sinking of the Titanic reveal the horrifying truth of its tragic sinking.

During the Titanic's journey to New York City, the vessel failed to divert course from an iceberg and ruptured five of its sixteen hull compartments. Since the ship could only stand to lose four, as the five compartments filled with water, they slowly took down the hull. Moreover, the compartments were not capped at their tops, so as the bow sank, water from the ruptured compartments began to fill the succeeding compartments. The bow began to sink and the ship was lifted to an almost-vertical position above the water, breaking in half and eventually sinking to the ocean floor. About 700 of the people aboard survived, most of them women and children.

This 1912 rendering of the lowering of lifeboats just after Titanic began to sink is from a page in a publication called The Graphic. Again, mostly women and children were placed aboard those boats. There were not enough to accommodate the entire capacity of the ocean liner.

This illustration is also from The Graphic, and displays the damage done to the Titanic upon striking the iceberg. Five compartments were torn open and subsequently flooded.

The Titanic struck the iceberg in the midst of a thick fog south of Newfoundland, just before midnight on Apr. 14, 1912. This was also illustrated in 1912, in Le Petit Journal.

This is a depiction of when the Carpathia arrived to pick up survivors in lifeboats after Titanic sank. This is from The Graphic, also in 1912.

An illustration by French artist Henry Laros in The Graphic of how he imagined the great vessel to rest after its demise. He depicted the ship lying on the ocean floor, on the sea bed, under packed ice.

Joseph Keppler Jr. created this lithograph, published in Puck in May 1912, calling it "The Grim Spectre." It is a satirical image that questions why the boat was so magnificent, but without the proper number of lifeboats to save its passengers. The image reads, "Why all this hue and cry about lifeboats? Have you not your veranda and Parisian cafes, palm-garden, squash-court, gymnasium, swimming-pool, Turkish baths, and a la carte restaurant?"

This is an artist's impression of the Titanic sinking. Stressed again is the luxuriousness of the liner, but lack of lifeboats to save its 2,228 passengers.

Originally published in Illustrated London News in 1912, this image depicts survivors in lifeboats watching as the ocean liner sank beneath the waves.

This is a postcard mourning the loss of 1,635 passengers and crew, marked with the words "Nearer My God To Thee."

Over 100 years after the sinking of the Titanic , the tragedy remains emblazoned in the hearts and minds of people from around the world. It is truly a misfortune unlike any of its kind; no person expected that fateful maiden voyage to end so tragically. The story devastates to this day.