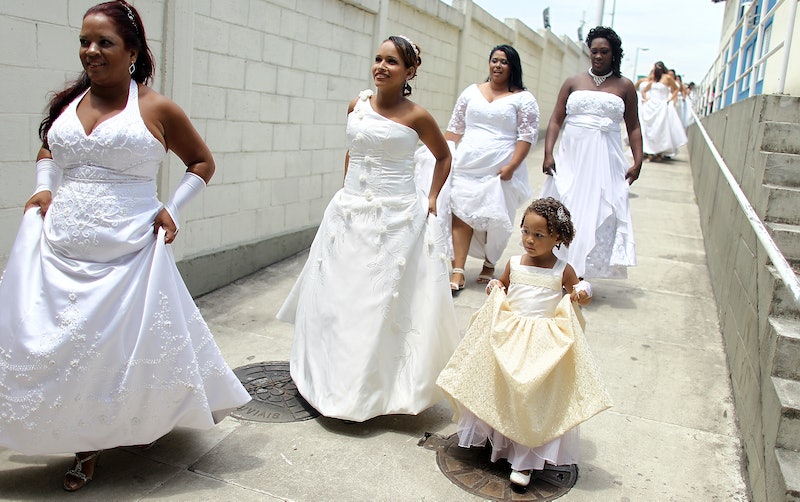 In a nutshell: The rich marry rich and get richer, the poor marry poor and get poorer.

Here are some of the statistics from the study, which was led by Jeremy Greenwood:

And this, according the study's economists, is an ingredient in the recipe of income inequality. So, unfortunately, maybe this won't isn't as easy:

The study also shows that assortative mating is correlated with a measure of income inequality that is 30 percent higher than if better-educated people married randomly.

Unfortunately, this study has led to news stories with headlines such as Bloomberg's "Did Women's Lib Cause Rising Income Inequality?" and which distorted the main points from the study:

Intelligence, education and incomes tend to go hand in hand in a free society. Until quite recently, the ambitions of half the population were suppressed by law and culture. That made the distribution of income more equal than it would have been under a less-restrictive social system. Now that tens of millions of women have greater opportunities to live up to their potential and marry men who are their equals, household income inequality has increased. If that's the case, lowering inequality will be a lot harder than anyone imagines.

Incidentally, a chart by Pew Social Trends tells a bit of a different story:

So the rates of couples with the same level of education have barely changed. Pew Social Trends also adds:

Marriage rates have declined for all adults since 1970 and gone down most sharply for the least educated men and women.

If marriage has gone down, that throws a hole in the Bloomberg article's suggestion that having more educated women and more women in the labor force has somehow lead to more income inequality.

One drawback of using the study to predict the future: It focuses on the relationship model as being husband-wife. With all the victories the U.S. has seen in marriage equality, we have to remember that marriage is no longer just the husband-wife model. We're looking forward to the day that same-sex couples are incorporated in these sorts of studies, too.

More like this
An Open Letter To The Person Who Bought Steve Jobs’ Birkenstocks For $218,000
By Ginny Hogan
8 Money Saving Experts To Follow For Accessible Advice
By Maxine Harrison
What Is Harry & Meghan's Net Worth? They're Richer Thanks To Their Netflix Doc
By Hugh McIntyre
10 Organizations To Support On Latinx Women's Equal Pay Day
By Caroline Burke and Mia Mercado
Get Even More From Bustle — Sign Up For The Newsletter