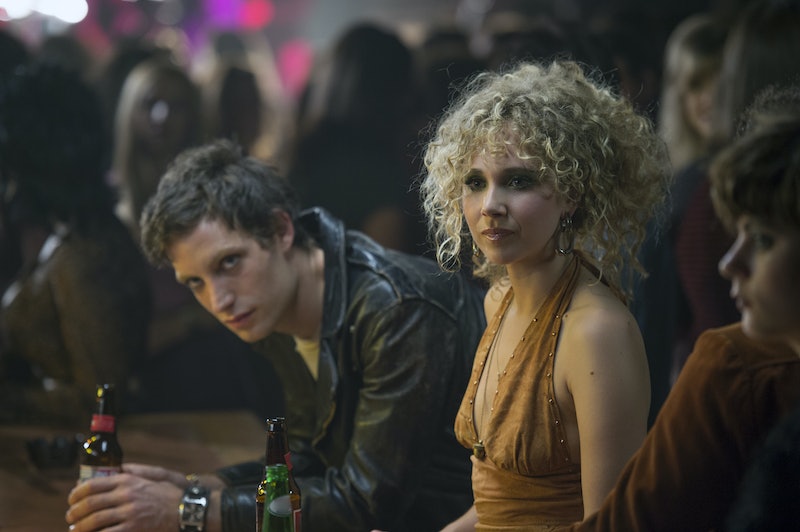 HBO's Vinyl premiered on Sunday night and it's a '70s rock drama with some of the most impressive names behind it: Mick Jagger, Terence Winter, Martin Scorsese, and starring Bobby Cannavale. Early in the two-hour premiere of the TV series, you may have noticed Kip, a young fresh face with big punk rock dreams and a great demo tape. So, who plays Kip on Vinyl? It's none other James Jagger, Mick's son. The younger Jagger plays the lead singer of the Nasty Bits, a punk rock band on the rise that gets discovered by American Century assistant Jamie Vine (Juno Temple).

Vinyl follows Richie Finestra, the head of the label American Century who is facing a very interesting time in music. Rock isn't what it used to be anymore. The punk rock movement is about to begin. Disco is about to be big. And hip-hop is showing its early roots. At the forefront of punk rock is Jagger's Kip, who gets showcased at the end of the first hour in a noisy stage show clad in some sweaty mascara. The crowd boos him and a fight breaks out, but Jamie is totally into it. Later on, they have sex and viewers find out that this star on the rise is also a heroin addict. Uh oh.

The 30-year-old actor is not just the legendary rocker's son. James Jagger has experience as an actor, appearing in Stealing Summers and Sex & Drugs & Rock & Roll. He's also a musician, just like his dad, and was the frontman of a band called Turbogeist. The younger Jagger told Billboard he and the Turbogeist helped write some of the Nasty Bits' songs in the pilot. Regarding Kip, Jagger is enjoying playing the character. "It gets worse before it gets better, let's just put it that way. "You see more of the human side to Kip as the show progresses," Jagger told Billboard. "It was nice to be able to show there's more than one facet than this sort of demonic, ruthlessly competitive, ambitious [character]. He's a sweet guy, deep down."

More like this
Britney Spears Met The Weeknd & Sam Levinson, So She May Actually Be On 'The Idol'
By Jake Viswanath
Selena Gomez Joked About Her Relationship Status In Her ‘SNL’ Monologue
By Grace Wehniainen
'Games of Thrones' Fans May Recognise This 'Conversations With Friends' Location
By El Hunt
Twitter Has Very Mixed Feelings About The New 'American Idol' Winner
By Jake Viswanath
Get Even More From Bustle — Sign Up For The Newsletter