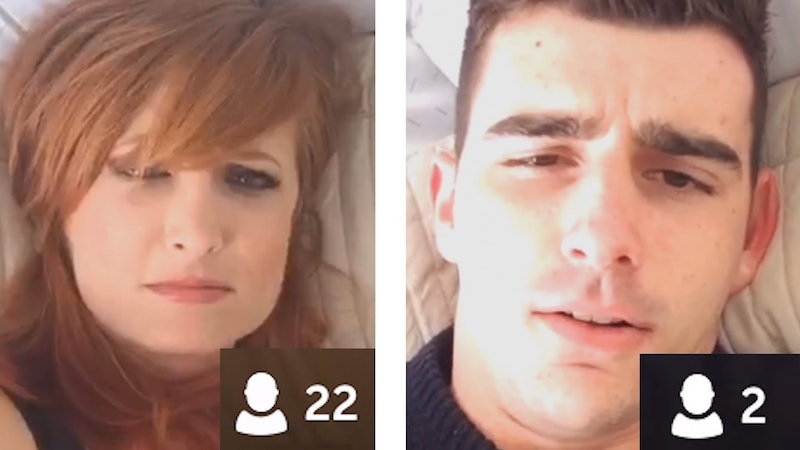 Ever wonder how your experience on the Internet would change if you were the opposite gender? In a new video, BuzzFeed attempts to answer this query by having a man and woman live stream the same moments at the same time, using Twitter's Periscope app. The results highlight how differently men and women are treated by the online community. And if you are guessing that someone received the comment "Show me your boobs," well, you guessed right.

Through Periscope, Twitter users can shoot live feed with their iPhones or iPads, and broadcast it to the Twitter community. As the viewers join and watch a feed, they can send a "heart" to indicate that they like the broadcast, or type out a message to the host that can be seen by fellow audience members. This allows the host to respond to the comments in real time — live feed meets chatroom. The videos are available for 24 hours after the original broadcast, lending it a Snapchat quality as well.

The app was originally created with the idea of "discovering the world through someone else's eyes" as they say on the website. The voyeuristic pleasure of Periscope is evident in one of the most watched (and loved) Periscopers, Amanda Oleander. Nominated for "Periscoper of the Year" Shorty Award, the attractive and quirky 25-year-old artist living in LA uses the app to record her everyday life. Most recently broadcasting herself making a Valentine's Day brunch in her "messy" kitchen. She has a faithful band of followers, hundreds or thousands logging on frequently to watch and interact with her.

When the male participant did a humorous dance, viewers were not impressed. As he showed off his "go to" moves for the club his performance actually lost viewers.

Just getting up the courage to dance, and raising her arms slightly, the number of viewers grew for the woman's feed. Many commenters remarked on how "beautiful" or "hot" she was, and though her dance performance was silly, it didn't lose her any views.

The next challenge was for the man and woman to just stand in a room and basically do nothing. No one really cared to watch the man stand. However, the woman's viewership continued to grow with zero effort on her part.

While she received more attention, not all of it was positive:

To be clear: no nudity is allowed on the Periscope app. But sadly, it too has its share of online creepers. In the wrap up interview, the woman was not surprised by the results, but was a little disappointed: "I didn't have to say anything interesting, I didn't have to do anything to get attention — which kinda negates that I have a brain." The man felt that no matter what he did or how well he performed, there was nothing he could do to make people watch his feed.

It's fairly apparent that there is no gender equivalence on the Internet. However, the pleasure of people taking interest in your social profile can be marred quickly by "Remove your shrit babe."

Watch the entire experiment here and see the gender differences for yourself:

More like this
The Case For A Hard Launch Summer
By Morgan Sullivan
TikTok Is Using A ‘Love Island’ Sound To Expose Their Weird Crushes
By Courtney Young
What Is “Night Luxe?” Breaking Down TikTok’s New Aesthetic
By Courtney Young
The Viral TikTok “30,000” Sound Fits Nearly Every Scenario
By Courtney Young
Get Even More From Bustle — Sign Up For The Newsletter