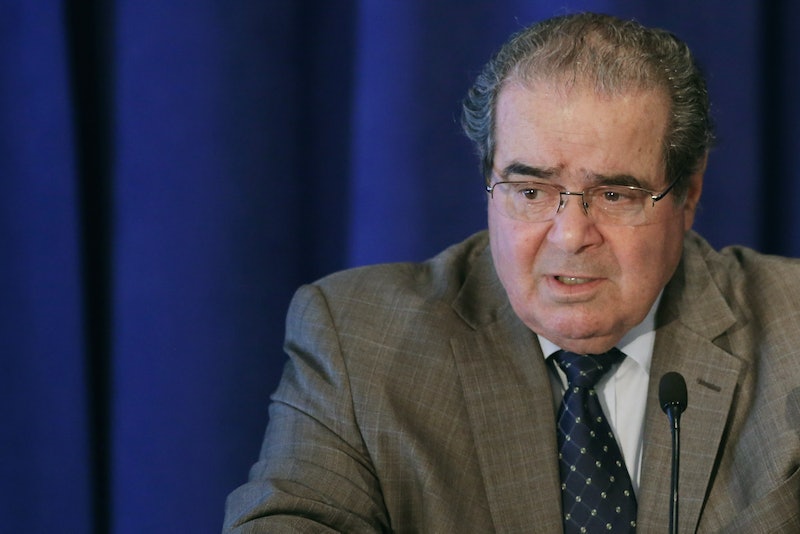 After hearing about the passing of conservative Supreme Court Justice Antonin Scalia, radio show host Alex Jones took to the web to share a theory behind his death: Scalia was murdered. Scalia was found dead at a resort in West Texas at the age of 79, and the county judge pronounced he died of natural causes. As the nation mourned his death and Republicans immediately called for the Senate to postpone appointing a replacement until the next president is in office, Jones was busy posting a lengthy video on Facebook laying out "evidence" that Scalia had been murdered. However (and unsurprisingly), the Scalia murder conspiracy theory can easily be debunked.

After accusing President Obama of blackmailing Supreme Court justices and funding ISIS (among other crimes) in an "emergency transmission" video to his fans Saturday, Jones said, "this is the season of treason," and "we would be fools to not ask" if there was some concerted plan to take down Scalia. "You have to have your head examined if you didn't question whether Scalia was killed," Jones touted in his video, after speculating that drugs were slipped into Scalia's drink to induce a heart attack.

I hate to break it to you, Jones, but this is not House of Cards, and the Democratic party does not have an elaborate plan to murder conservative leaders with whom they don't agree.

For starters, if Obama did want to kill Scalia, wouldn't it make more sense to do it much earlier in his presidency? He now faces an uphill battle to push a Supreme Court nomination through a Republican-led Senate before someone else is in the White House in January. Republicans didn't take control of the Senate until 2014, so the Obama administration could have replaced a Supreme Court justice with significantly fewer issues than it faces now.

DC Whispers, which isn't exactly the most reputable website, claimed that Obama knew about Scalia's death hours before it was made public, insinuating that the president's alleged prior knowledge meant he was somehow involved in the justice's death. Assuming that's true, as the leader of the nation, Obama gets a lot of news before it's made public, including threats to national security and military issues. The passing of a Supreme Court justice is a big deal — any president would be notified immediately. Attempting to use the president's knowledge of a major political event as evidence that he was involved in a pre-meditated murder is ludicrous. If Obama is informed of a possible North Korean missile launch before news organizations report it to the public, does that mean he played a part in the scheme? Obviously not.

Because Scalia's family declined to have an autopsy done and a judge said one wasn't necessary, Jones can continue to speculate about how he really died — and he has. On his radio show on Monday, Jones hammered on the Scalia murder conspiracy theory speculation. "If this is foul play, if the Clintons are murderers — which is known — if the ocean is blue... what do you think is happening here?" Jones spouted in an illogical stream of murderous conspiracy theories pegged to major Democrats.

The news site WND (WorldNetDaily) also jumped on the Scalia murder claims. "Anytime a head of state, member of Congress, or the most conservative member of the U.S. Supreme Court is found dead, an extensive autopsy and toxicology examination should be both immediate and mandatory," said William Gheen, president of the Americans for Legal Immigration political action committee. (That said, according to the Anti-Defamation League, Gheen is known for "advanc[ing] his group's mission by branding undocumented immigrants as murderous criminals.")

"We do not contend there is a conspiracy, we contend that there should be no doubts, and the way authorities and the media are rushing conclusions will leave major doubts and legitimate concerns about a death that could lead to a radical political transformation of America to the left," Gheen added.

Right-leaning politicians and voters may be especially upset by the death of the Scalia, who The New York Times called "a leader of a conservative intellectual renaissance." Nevertheless, a far-fetched conspiracy theory claiming that the revered Supreme Court justice was murdered only inflames the divisive battle to fill his spot on the bench and detracts from honoring Scalia's life and legacy.

More like this
What Is Barack Obama’s Net Worth? He Makes *Way* More Now As An Ex-President
By Hugh McIntyre
Sarah Everard’s Killer Wayne Couzens Is Appealing His Whole-Life Sentence
By Sophie McEvoy
President Zelensky Spoke Out On Ukraine's Chances Of Hosting Eurovision Next Year
By Sam Ramsden
Michigan’s Governor Is “Going To Fight Like Hell” To Protect Abortion Access
By Andrea Zelinski
Get Even More From Bustle — Sign Up For The Newsletter