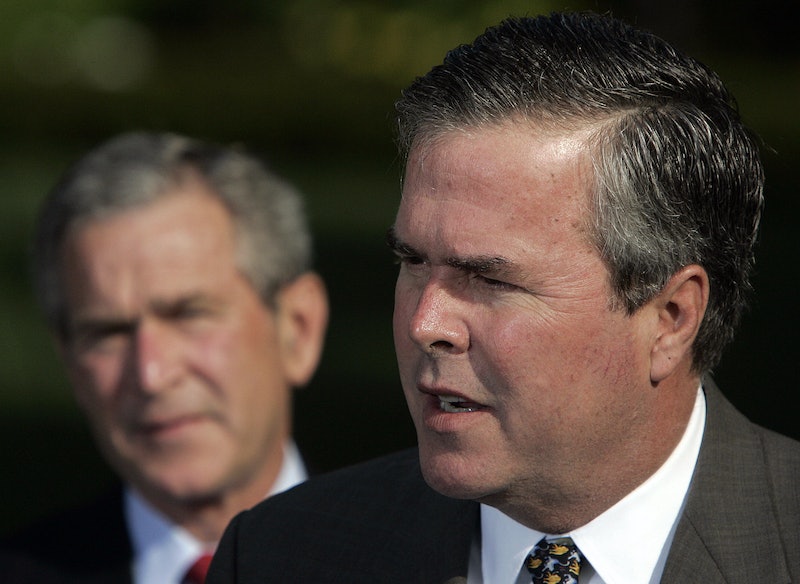 On Monday night in North Charleston, South Carolina, the 43rd president of the United States will end his political hibernation to help his little brother become the 45th. For the first time this election season, George W. Bush will stump for Jeb Bush and add some, shall we say, zest to his sibling's less-than-invigorating presidential campaign. George W. will campaign in the flesh along with his wife, former first Lady Laura Bush, at a rally, marking the first time the Bush brothers have publicly appeared and joined forces for Jeb's 2016 presidential run.

It is no secret why George W. is being placed front and center precisely at this point in Jeb's campaign — his big brother has a strong track record in the Palmetto state. Not only did he and father George H.W. Bush both win their primaries in South Carolina, but some political experts note the Bush name, even the oft-maligned George W., still carries major cache in the state. "The Bush family is extremely well regarded in South Carolina. We will take any family member with the last name Bush at any time," Brett Doster, who oversees Jeb's South Carolina campaigning, told ABC News. Also, George W. earns 77 percent favorability among Republicans, as noted by a Bloomberg Politics national poll. While he may not be as helpful if Jeb's campaign makes it to a national face-off with the Democratic nomination, George W.'s popularity among Republicans makes him potentially quite useful in the primaries.

What seems especially serendipitous about the George W. rally, though, is that it comes just two days after Jeb appeared strong and competent during a debate — a rarity in his campaign so far. And not only did he seem unusually forceful and capable, but he did so when it came to the issue of his brother's foreign policy record, a subject which many speculated since Jeb announced his candidacy would be an insurmountable roadblock to the Oval Office.

Instead, at Saturday's South Carolina debates, Jeb shined when he spoke about his family, especially George W. — and the audience loved it. After Donald Trump blamed George W. for letting the Sept. 11 attacks occur in 2001, Jeb put him on blast:

So here's the deal. I'm sick and tired of Barack Obama blaming my brother for all of the problems that he has had ... And while Donald Trump was building a reality TV show, my brother was building a security apparatus to keep us safe. And I'm proud of what he did.

It was hardly the first time Jeb was questioned about his brother's White House record, and it almost certainly won't be the last. Saturday was one of the few times Jeb responded to the topic in a way that ultimately turned his brother into an advantage for his presidential campaign.

However, the exchange raised larger questions that aren't exclusive to Jeb's candidacy or even the race for the Republican presidential nomination: How much should a relative's political record influence our judgment of a prospective presidential candidate?

The obvious Democratic counterpart to Jeb on this issue is Hillary Clinton; husband Bill has his two terms at 1600 Pennsylvania Avenue to serve as a political asset — or, provide baggage, depending on who one asks. Hillary, herself, has implied that Bill could potentially have an active role in her prospective White House and proudly cited his accomplishments during the January Democratic debates in South Carolina. "I'm going to have the very best advisers that I can possibly have," she said, "and when it comes to the economy and what was accomplished under my husband's leadership in the '90s — especially when it came to raising incomes for everybody and lifting more people out of poverty than at any time in recent history — you bet."

While Hillary has chosen to link herself with her husband's presidential record in a pronounced way, part of his White House tenure and his overall political career involved affairs and claims of sexual harassment. If Hillary wants to align herself with her husband's relatively popular tenure in public office, should she be exempt from answering questions about his extramarital affairs? Or, more specifically, should she have to answer for the sexual assault allegations against him? Many may argue that's his personal life, and not something over which Hillary should be held accountable. The Clintons have vehemently denied any of the assault claims made against Bill. Moreover, and more importantly, he has never been convicted of them.

Still, is it dirty politics to bring it up, just another form of useless mudslinging? Or, is it relevant when Hillary talks about elevating women in the workplace to ask about Paula Jones, a former Arkansas state employee, who alleged Bill sexually harassed her during a conference, dropped his pants, and asked her to perform oral sex?

As the race for the Democratic and Republican nominations intensifies, the media and the country will be wrestling more and more with questions of how much a family member's record and resume should be used to evaluate a 2016 candidate. It won't be black-and-white what is and isn't fair game, and how much candidates voluntarily bring these family members into their campaigns should be part of the consideration.

The only matter that is certain is that as long as a Bush and a Clinton or in the race, the personal will be political.