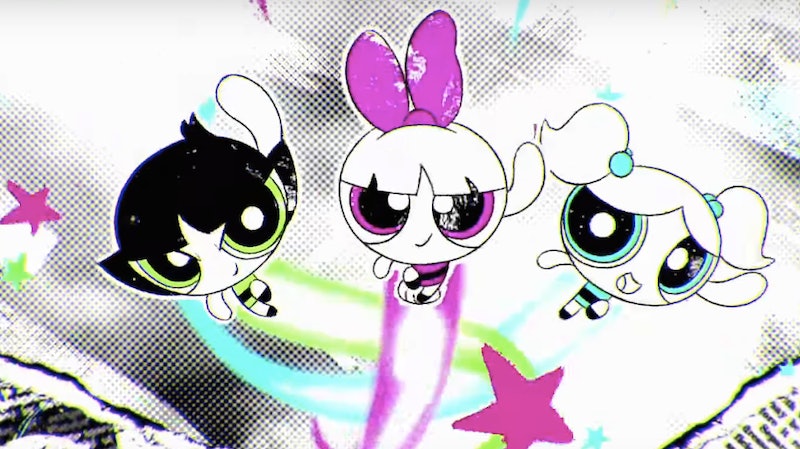 If you weren't already excited for the Powerpuff Girls return to Cartoon Network, then it's time to start getting pumped up. And, what better way to get pumped up then by jamming out to the new Powerpuff Girls theme song, "Who's Got The Power?" That's right. Blossom, Bubbles, and Buttercup are not just stopping crime and being total female-empowerment icons for the next generation. They're also taking Townsville by storm by rocking out to a brand-new, girl-power-inspired song. You know, in case you didn't already believe how strong and powerful they are. Honestly, I'm liking this version of the theme song a whole lot better than the music they originally used.

Coming just days after the release of a first look clip at the new reboot, now we have an array of their legendary colors, the ever-so-famous run-through of how they were created ("Sugar, spice, and everything nice" plus, Chemical X, of course), and just overall awesomeness to appreciate from this new video. But, now, there's something about the show's new theme song that just draws me in further. It's more hip, more fun, and I can totally imagine hearing this song play over episode to episode as I aimlessly marathon the show. Seriously, how cute is all of this?

However, despite all of the new, fancy additions, what the new music video does best is preserve what we already know and love about the Powerpuff Girls. As I hinted earlier, they kept the original voiceover and introduction from the show's initial theme song. But what Cartoon Network was also sure to do was to show us all of the villains we can expect (familiar faces, anyone?), flip through some happy family photos, and reintroduce us to the cute quirks of each individual character. Basically, say hello to your cartoon-watching childhood that you may have since left behind.

The new theme song is performed by the Seattle, Washington-based band, Tacocat, and the Powerpuff Girls will be returning to Cartoon Network as of Spring 2016. Now I just need to decide whether or not I'm going to wear blue, green, or pink when I tune in... Maybe I'll just go with all three.