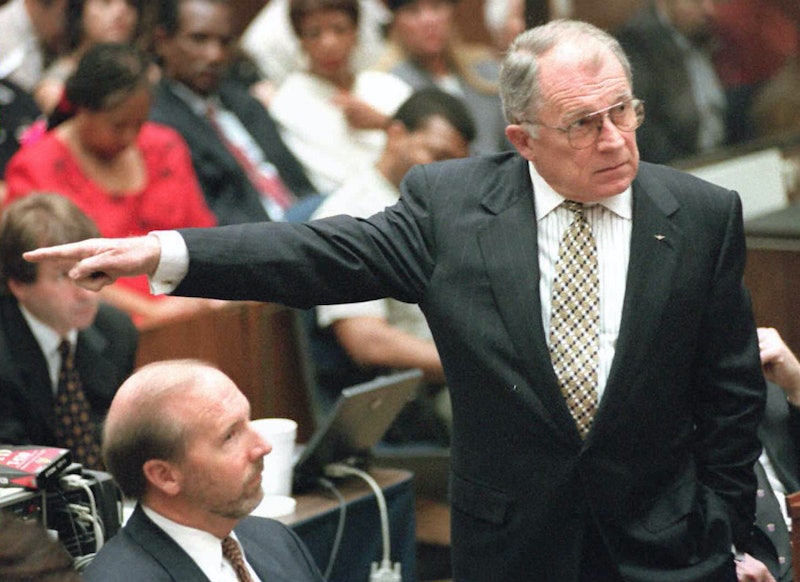 As if American Crime Story: The People V. O.J. Simpson didn't have enough names floating around, here's one more you should keep track of — Dr. Sam Sheppard, whose case will become an important comparison point for Simpson's as the show moves on into the legal proceedings. So, who is Sam Sheppard? Dr. Sheppard, who died in 1970, was a doctor who was convicted of murdering his wife in 1954, only to be exonerated in 1966, according to Cleveland State University. His initial conviction came in a trial that, for the time, was a media sensation — not unlike the way the O.J. Simpson case is looked at today. And as the History Channel's website claimed, the trial paved the way for the media blackout now required to ensure juries make unbiased decisions.

Sheppard's life is often credited as being the inspiration for the TV series and film adaptation of The Fugitive , even though the creator of the series and writer of the 1993 movie, Roy Huggins, denied any direct inspiration in an interview with the Los Angeles Times. Reporter Jane Galbraith wrote, "The Fugitive, Huggins insists, was inspired by an idea to do a series about Western heroes and drifters and then contemporized for the growing television audience of the 1960s."

In The Fugitive, most of the story revolves around Dr. Richard Kimble (Harrison Ford at his mid-1990s best) trying to find the real person who killed his wife, while being pursued by a doggedly determined U.S. Marshal played by Tommy Lee Jones, who won an Oscar for one of the best line deliveries in movie history:

Even if Sheppard's story didn't inspire The Fugitive, Sheppard's case does have some connections to another show: American Crime Story which details O.J. Simpson's murder trial. Simpson was acquitted of his wife and Ron Goldman's murders in 1995. However, according to The New York Times, he was found guilty in the resulting 1997 civil suit and ordered to pay "$25 million in punitive damages to the families."

Sheppard was found not guilty of his wife's murder, as well, but was actually sent to jail for 10 years before a retrial led to his 1964 release and 1966 exoneration, according to Cleveland State University's case files. But, the two cases share a key legal figure, according to the Baltimore Sun, attorney F. Lee Bailey, who argued for Sheppard's release and was a part of the "Dream Team" working on O.J.'s criminal case (in the series, he is portrayed by Nathan Lane).

Another intriguing factor is that a lack of familiarity with blood spatter and blood type testing may have been what led to Sheppard's false conviction, according to CNN. "The trail of blood (found at the home) could only have come from the killer," CNN quoted lawyer Terry Gilbert, who helped represent Sheppard's son in a 1998 attempt to clear his father's name. "The question then becomes, 'Whose blood can it be?'"

The question of blood evidence also came up in Simpson's trial. According to the New York Times, Simpson's defense team tried to disprove Simpson's blood evidence at the crime scene by claiming that prosecutors planted the evidence from pilfered blood samples. According to The Los Angeles Times, when Detective Mark Fuhrman was asked on the stand, "Did you plant or manufacture any evidence in this case?" Fuhrman replied, "I wish to assert my 5th Amendment privilege."

Even though these two cases wound up with very different results, they provide startling examples for how little changed over 40 years of legal battles, right down to the same defense attorney working on both cases.