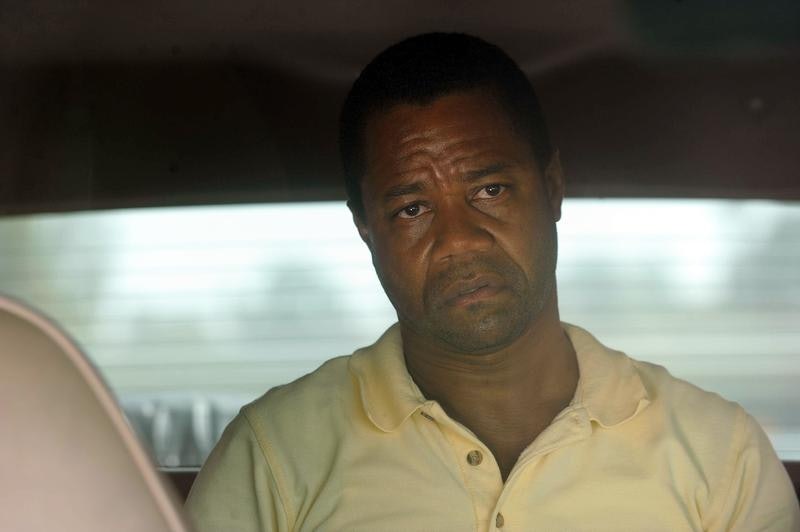 Whenever a TV show portrays a real life event, it can sometimes be difficult to separate fact from fiction. What things actually happened and what's been added on for dramatic effect? These are the things viewers grapple with constantly, especially in regards to FX's latest limited drama series The People v. O.J. Simpson: American Crime Story . One aspect of the show, in particular, that's caught the public's attention is the connection between Simpson and the Kardashian family. We already knew that Robert and O.J. were very close friends, but this direct insight into their friendship is causing old questions to once again bubble to the surface — like whether or not O.J. Simpson is actually Kim Kardashian's godfather, for instance.

The series certainly seems to think he is, which means that either a.) Ryan Murphy knows something that we don't (which would not be surprising), or b.) Murphy is taking fictitious liberties with the storyline for plot purposes. But regardless of what his reasoning might be, it's important to note that in real life the connection between Kim K. and Simpson still remains a bit of a mystery. Apart from American Crime Story, the only time that Simpson's supposed Godfather title has been evoked was during a Los Angeles Times interview back in 2008 when Simpson referred to Kim as "my goddaughter." However, Kim Kardashian herself has never confirmed this to be accurate.

But that's not to say that she didn't still think of Simpson as family while growing up. In fact, during a 2009 interview with Dr. Phil, Kim revealed that she and her siblings used to always refer to Mr. and Mrs. Simpson as "Uncle O.J." and "Aunt Nicole." Now, you'd think that this would've been the perfect opportunity to mention if he was indeed also her godfather, but she never brought it up.

Kim also has never publicly commented on if she believes Simpson killed his ex-wife Nicole Brown and Ronald Goldman, the murders of whom he was found not guilty in 1995. “I don’t think I’ve ever answered it," Kim said during the Dr. Phil interview. "It’s not that I don’t care, it’s just that I think that was the biggest struggle within our family, besides the divorce between my parents. It’s the biggest separation that my family’s had, so why even bring it up?"

Then there's the fact that Murphy isn't always sticking with the facts when it comes to portraying this family. A source even recently told E! News that the cheering scene we saw last week of the kids as they watched their father on TV "never happened." So it's possible that American Crime Story is bending the truth in regards to the whole godfather connection as well. So I suppose until we get a concrete confirmation, we can just consider this yet another mystery surrounding Simpson's complicated life.