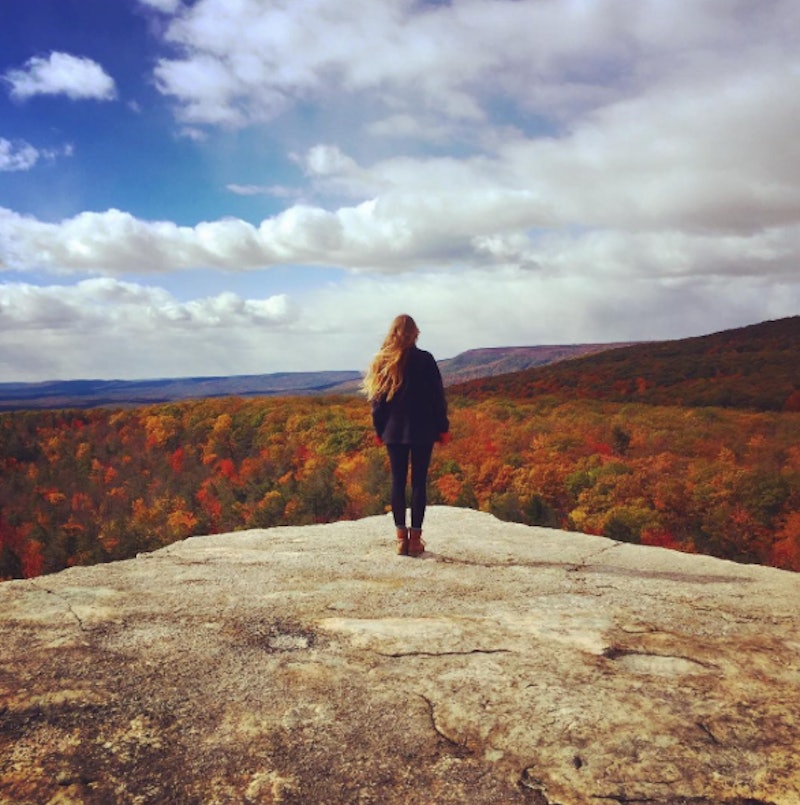 Growing up in a woodsy suburb, I always felt like I was more of an indoor kid. I wasn't particularly athletic, I was scared of the woods, allergic to most plants, and sneezed in the sun. While the other kids were trekking through the forests, playing hide and seek, collecting pet rocks, skinning their knees and looking for Big Foot, I was inside. I much preferred to play in the world of Super Mario from the safety of my living room. I wanted to be a part of my surroundings and I wanted to lay in the grass, weave flower crowns, pretend to smoke with twigs and go camping with the other kids, but it seemed my body and mind were not built for it.

About a year ago, my brother, who's much more of an outdoors kid than I, dragged me on a hike with him, and changed my life immeasurably. I was recently dumped, greasy-haired and sullen, sitting on the couch watching what I thought was The Jersey Shore but turned out to be Long Island Medium. My brother called me and asked what I was doing. I looked down at my sweat pants, which had little bit of hardened yogurt on them, and started to cry. "Writing," I lied. "Do you have sneakers?" he asked. "I'm not going running with you," I said, emotionless and stern. "We're not going running. I'm picking you up in an hour." I hated not knowing what we were about to do. My brother's always been more adventurous than I am, but typically he would embark on his adventures alone — he knew better than to drag me along, I'd only ever slow him down. He didn't have to see the YoPlait on my pants to know that I needed to get out of the house — he could smell my defeat through the phone.

After about an hour and a half on the highway, we were in Upstate New York. Just getting out of the city had already lifted my mood significantly. The site of green and the distance we were creating between me and my ex was empowering. When we parked at the base of what looked like a dangerously craggy mountain and held a sign that said "Breakneck Ridge" I told my brother I wasn't getting out of the car. Nervous that he'd actually leave me, I pleaded that I wouldn't be able to do it, I was too inexperienced, I'd get hives, I hadn't so much as climbed more than two flights of stairs in months, I was afraid of heights, snakes, bears, mountain lions, bees, cheerful teenagers, and failure. "Follow me," he said, ominous and unaffected. The base of the trail was a rock scramble, I barely noticed the height we were reaching because my head was down the entire time, my eyes chasing after my brother's heels and my hands looking for crags of rock to hold on to. I had no idea when it would end, and could do nothing but keep up. After 45 minutes we reached the first peak. The view was humbling. The foliage looked like fire, the Hudson River looked like a giant eel and our car looked like a pill bug, we were so high.

"See?" my brother said, smiling, full of himself. "You just have to shut up and do it," he continued. My palms were burning, and shredded from the rocks. My knees were raw and dirty, my shirt soaked, my heart like a hammer and my lungs heavy. Everything hurt and I felt amazing. My senses were all being unitized, so there was no room for obsessing over the details of my life, my ego. I was out in the world, with dirt under my finger nails and my mind felt free.

A few weeks later, while consoling my best friend who was taking her turn at having a miserable break up, I suggested we go on a hike. I worked for me after all, at least for an afternoon. The next morning we were in my car at 6 a.m., chewing apples and singing along to Johnny Cash. By noon we were over three thousand feet in the air, perched on the ledge of Slide Mountain, one of the highest elevations in the Catskills. The tree tops below looked like broccoli and us once-broken-hearted women above, felt like steel giants.

I've always had trouble staying present when in awe. If you've ever caught me crying at the sight of a sunset, it's not the beauty that's making me tear up, it's the frustration that comes with not knowing what to do with it. Where do I put that image? How can I take it with me? How can I keep it forever? How can I make it a part of me? On that ledge, in the early afternoon, we were buzzing. Our bodies were tired from the climb but kinetic with wonderment. The views would never look as good in our memories as they did to our widening eyes. We couldn't sit there forever, in fact we had to leave quickly so as to race the fading sunlight back to the car park.

On the way down we talked about that feeling, that "how can we keep this?" feeling. Getting out of the city and away from ourselves had brought us so much closer to both our truer selves and each other. It was a dose of a medicine we didn't know we needed, and now we worried it would be too hard to live without it.

And so we made a pact: each possible weekend, we'd leave the city and find a new trail. Sixteen towns and twenty hikes later, we took our last dose of our medicine as the winter air rendered us defeated. But just for a little, because there's nothing I'm more confident about than the fact that for the rest of our lives, my best friend and I will spend every possible warm weekend roughing our knees and opening our hearts to the mountains. These are eight of the most impactful effects hiking has had on my life.

How Not To Fuel Fear

Before each ascent, I was dizzied with fear. After that summer, I learned that best thing to do when feeling fearful is to use that adrenaline to go forward. It's so easy to become crippled with fear, it comes in such intoxicating waves, rending you helpless if you allow it to. And so I learned that when I'm feeling fearful, the best thing to do is use it to jump. Take the first step the second I feel it. Now that I have a "don't think, just do it" mentality, it leaves less room for fear.

How To Power Through

There were times on some of our longer hikes where I'd look at the map, hoping to see that we were close to the end, only to find out we had eight more miles to go. Before, it was my nature to fall apart when faced with obstacles. I'd slump to the ground and have a temper tantrum and waste my energy on expressing my frustration. Now, I've learned to take the frustration and use it as power to keep going. Once you take all of the ego and expectations and idealistic attachments out of the picture, it's so easy, it's just: one foot after the other.

How To Stay In The Moment

Hiking a new trail is not dissimilar to taking a yoga class with a new teacher. You have an idea what types of movements you might be doing, you have a general idea of what to expect, but you have no idea how long the difficult part will last. You don't know where the descent will start and you have to preserve your energy for whatever might be required of you. Existing in this place caused me to be in the moment. I had to be present and enjoy each part of the trail because I never knew if it was going to get easier or harder. Embracing everything, not trying to get to the next check point or transition into the next pose is the best way to exist in the moment.

Honestly, I never cared much about New York State. There was the city where I worked and the suburb where I grew up and that was all that mattered. My love for hiking has forced me to explore each corner of this outrageously diverse state. I've come to enjoy the sensation of not knowing where we're going. I've come to look forward to exploring a new town each week on a hunt for trail mix and coffee. I now have a list of trails spanning across the United States that I plan on taking in the next year. Once you take a few steps outside of your comfort zone, the whole world becomes yours.

How To Find Internal Harmony

It's so easy to forget that the mind and body are one. But when you're on a ten mile hike and the temperature is just barely above freezing, you learn very quickly that your body is a machine. It needs fuel and it needs care. It functions its best when it's well fed and loved. I never feel so thankful for my body then when I finish a difficult hike, I want to kiss my own feet, I'm so grateful.

How To Connect To Another Human

When you go on a six hour hike with someone, you should definitely chose someone you're comfortable with. There's nothing like being close enough to someone to be able to both enjoy silences and the freedom to speak your mind. No matter how obvious your map is, and no matter how clear the trail is, you'll get lost or confused at one point on each outing. Learning how to come to one conclusion with two very different minds takes a lot of time working out the kinks and learning how to communicate most efficiently. I didn't think it was possible to become closer with my best friend, but after spending many darkening afternoons with her in the middle of a forest, in the middle of nowhere, with empty water bottles and the sound of large animals waking, our minds merged. Having the same objective (survival) makes your connection irreparable.

How To Problem Solve

Yes, there's an app for literally every issue one might encounter indoors or outdoors. But when you've been hiking for ten hours and your phone is dead and you've wandered off the trail, you have to start using your brain. You can't Google Map your way out of there. Hiking has encouraged me to educate myself about directions and survival so that I can save my ass without my phone if I need to. Before I began spending so much time getting lost in the woods, I relied on my phone for everything. Never before was wireless problem solving such a real and necessary tool.

How To Trust Yourself

It's unfortunate that I didn't trade Mario in for the woods sooner, but I wouldn't trade my introduction into the woods for anything. Hiking has taught me how capable my body is, when I allow it to be with my mind. I've learned that so much of what I told myself I couldn't do, were things that I was completely capable of. Now that my body has proved itself to me, I've learned to trust myself. There's nothing you can't do, there's only what you won't do.

More like this
How To See The Lunar Eclipse On May 15-16, 2022
By Kaitlyn Wylde
How Trainers Compare Glute Bridges Vs. Hip Thrusts For Your Butt Workouts
By Carolyn Steber
Lance Bass Says This Workout Machine Has Changed His Life
By Kaitlyn Wylde
6 Full-Body Tabata Workouts, Straight From Trainers
By Carolyn Steber
Get Even More From Bustle — Sign Up For The Newsletter