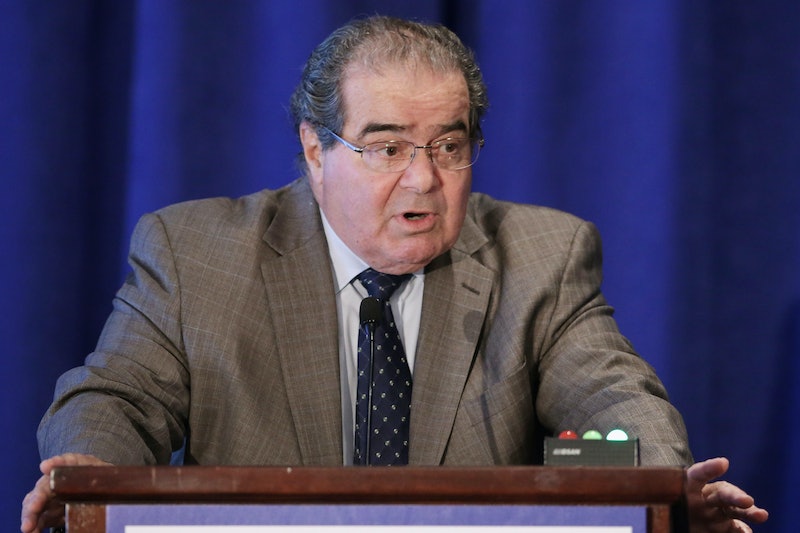 Although he is remembered as one of the most staunchly conservative members of the Supreme Court, Antonin Scalia had some unexpectedly liberal moments in his career that may surprise his biggest fans and critics. In the days following his death at age 79, historians, journalists, and politicians have shared their musings about Scalia's legacy. At The New York Times, Adam Liptak declared Scalia a "leader of a conservative intellectual renaissance." However, Scalia was more accepting of the other side than he often let on to outsiders.

Apparently, when Supreme Court justice David Souter announced his retirement in 2009, Scalia made some White House moves to throw a name in the running for the replacement. According to David Axelrod, a former senior Obama advisor, at the White House Correspondents Association dinner that year, Scalia took the bold opportunity to suggest a Supreme Court justice to him to be passed along to the president. While Scalia's gutsy gesture isn't all that surprising, considering his reputation, the person he suggested was Elena Kagan. Generally politically and socially progressive, Kagan is not the kind of person one would expect Scalia to seek out for the Supreme Court, but she was a personal friend of his. According to Axelrod, Scalia told him:

I have no illusions that your man will nominate someone who shares my orientation, but I hope he sends us someone smart.

It is not difficult to imagine that Axelrod was taken aback when Scalia continued:

Let me put a finer point on it. I hope he sends us Elena Kagan.

Obama did not nominate Kagan, opting to put forward Sonia Sotomayor for the Supreme Court that year. Still, Kagan did eventually make her way to the highest court in the land, and Scalia's desire for her to be there reveals a willingness to reach out to people of all political views and leanings. It also displays his desire for colleagues offering a strong contrast to his own ideas to make the Supreme Court as effective as possible.

Despite their stark differences in constitutional interpretation, Ruth Bader Ginsburg maintained a strong friendship with Scalia. They both shared a love of opera, and they even vacationed together. As Scalia once put it:

If you can’t disagree ardently with your colleagues about some issues of law and yet personally still be friends, get another job, for Pete’s sake.

Ginsburg explained that she actually enjoyed how Scalia went about disagreeing with her. During the 1996 case United States v. Virginia — which ended the Virginia Military Institute's ban on admitting women — Scalia was the only justice who dissented. However, he sent his dissent to Ginsburg before she wrote her majority opinion so that she could tackle his specific points. She spoke of Scalia with frustrated warmth:

He absolutely ruined my weekend, but my opinion is ever so much better because of his stinging dissent.

He even had some unusual moments when the Affordable Care Act health insurance subsidies came before the Supreme Court, although he did ultimately dissent on the landmark 2015 decision. Scalia said that “somersaults of statutory interpretation” were taken to protect the Affordable Care Act, but his issues were ones of constitutional interpretation, not simple political obstructionism:

And the cases will publish forever the discouraging truth that the Supreme Court of the United States favors some laws over others, and is prepared to do whatever it takes to uphold and assist its favorites. I dissent.

In a truly progressive instance, Scalia once ruled that the Environmental Protection Agency (EPA) had the right to regulate carbon dioxide emissions, and President Obama subsequently used that ruling to close down old coal plants polluting the environment. As far as the rights of Muslims go, in EEOC v. Abercrombie & Fitch , Scalia wrote the majority decision, which found that the chain retailer was at fault after declining to hire a woman who interviewed wearing hijab, setting a precedence for what was expected in terms of employee religious protections.

Although Scalia was a steady conservative, it certainly did not preclude him from cooperating with his more left-leaning peers, or choosing more liberal sides in cases in an effort to do what he truly believed was right. He was a strong legal mind who will go down in history as a man of character, regardless of whether one agrees with or dissents from his views.