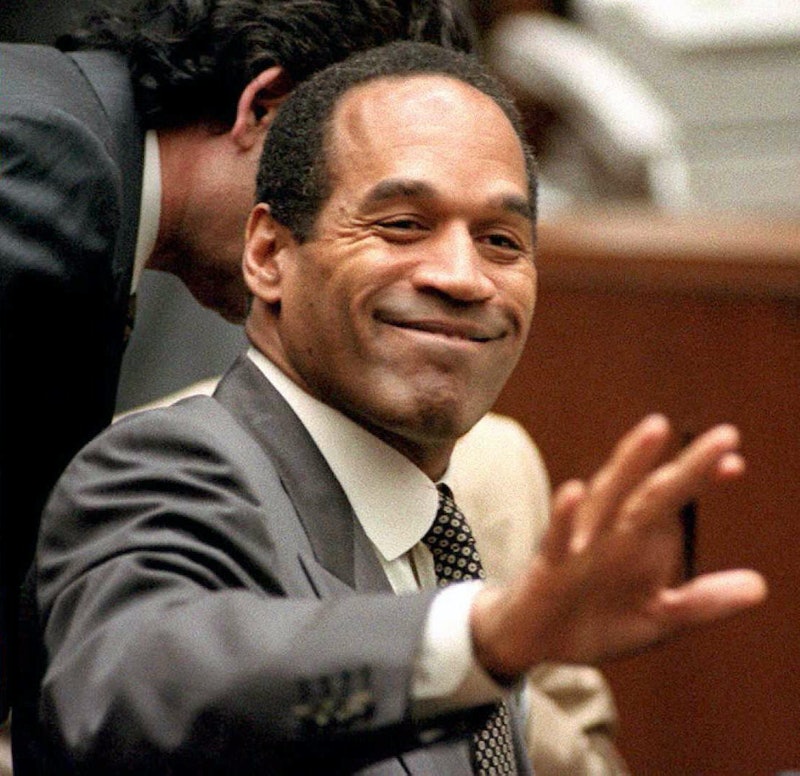 FX's docuseries The People Vs. O.J. Simpson: American Crime Story explores the deeper themes that arose throughout O.J. Simpson's trial for the murders of Nicole Brown Simpson and Ronald Goldman, of which he was found not guilty. There's one event that serves as a footnote to the overall narrative of the case, showing an interesting cross-section of the relationship between the media and race in the 1990s. That event is the release of the June 27, 1994 edition of Time magazine with O.J. Simpson on the cover. The headline read "An American Tragedy," but it was the accompanying photo that caused backlash, as the image was darkened. This led to accusations that Time was trying to make Simpson appear "blacker," causing then-editor James R. Gaines to release an apology in the magazine on July 4, 1994. Part of the letter to readers states, "it should be said (I wish it went without saying) that no racial implication was intended, by TIME or by the artist." But what was the story that caused such a controversial cover in the first place?

The article "O.J. Simpson: End of the Run" by Nancy Gibbs can currently be read in full on Time.com. However you can only read 10 Time articles online for free each month, otherwise, you must become a subscriber. Here are a few quotes that will give you an idea of the scope of the article behind that now infamous cover.

"We never thought he would run."

The first paragraph covers the overall sentiment shared by everyone who may have been able to prevent the Bronco chase, had they expected such a thing to occur.

"My speed has always been my best weapon. So if I can't run away from whatever it is, I don't need to be there."

This quote, attributed to Simpson, asserts the view of the article that the NFL star's truest self is a runner, whether he's running to or from something.

"It was terrible to watch and impossible not to. That was the nature of the entire week."

Gibbs succinctly captures the feeling of the entire nation and how they related to the ongoing media coverage of the Simpson trial. Even if you weren't watching it on television, it was all anyone was talking about.

"Hearsay was not just admissible; it was broadcast live."

Surely over the course of marathoning your favorite legal drama you've heard the words "Hearsay, your honor!" when a rumor or something unsubstantiated is treated as legitimate evidence. This is not allowed in a court of law, however in the media, anything that anyone had to say about Simpson or the murders was given attention.

"When I was a kid, Willie Mays was my hero. Not because he was a good baseball player. But because he had a big house."

Another quote attributed to Simpson himself, this speaks to how important money was to him as someone who grew up not having any. Throughout his football career, it seems he was running towards prosperity and wealth, something that has also been suggested on American Crime Story when depicting his '90s lifestyle.

"It was the bloodiest crime scene I have ever seen."

A quote attributed to "one of the first cops on the scene, a longtime veteran" discusses the sheer horror of the murder scene of Brown Simpson and Goldman.

"There [are] no larger meanings [to the case] -- just a howling, monstrous tragedy."

While the Simpson trial certainly forced the American public to look at issues of race, celebrity, domestic violence, the media, and misogyny in new ways that they weren't always comfortable with, at the end of the day, it wasn't some kind of poetic art piece — it was a double homicide. Two people died. Nicole Brown was a mother to two loving children. Ronald Goldman was a son to two loving parents. They died, and a media frenzy rose up from their deaths to the point where the case was barely about them anymore. The image of a "hero" fallen, innocent lives lost, and an overwhelming sense of injustice lead Gibbs to characterize the whole ordeal for exactly what it was – a tragedy.