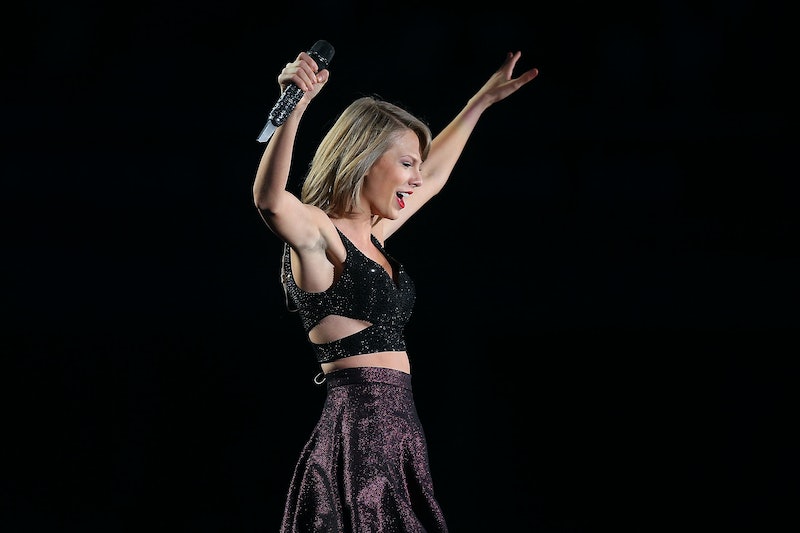 Not every Grammy of the night is presented during the ceremony. Some of them are announced long before the 2016 Grammy Awards even begin, and such was the case when it came to the Best Music Video Award. It will probably come as no surprise to anyone that Taylor Swift won the Grammy for Best Music Video for "Bad Blood," and it will also probably come as no surprise to anyone how Swift chose to react to her win. Despite the fact that the pop star is opening the Grammy Awards and thus is probably knee-deep in dress rehearsals or hair and makeup or whatever it is that celebrities do right before an award show, Swift posted a video celebrating her Grammy win that featured Selena Gomez prominently — and by prominently, I mean Gomez was freaking out in happiness for her friend's success. Say it with me guys: awwww.

I love it when ladies love and support ladies, and Gomez and Swift's friendship is one of the cutest in Hollywood right now. Of course, Swift has an entire girl squad of friends that are total #SquadGoals, but her friendship with Gomez goes way back and so it seems very fitting that it was the "Same Old Love" singer who was by her side to celebrate this momentous occasion. Just watching Gomez freak out, and then Swift freak out, and then the two of them hug and freak out just warms my heart and makes me wish that my own best friend was here so I could hug her for no good reason.

Watch the video below, and let the warmth of female friendships empower you.

More like this
Joe Alwyn Reacts To Taylor Swift Earning An NYU Doctorate In A Rare Interview
By Jake Viswanath and Nicole Pomarico
Harry Styles Addresses The Theory That His New Song "Daylight" Is About Taylor Swift
By Jake Viswanath
This Is How Taylor Swift Feels About Joe Alwyn’s Steamy New Series
By Alyssa Lapid
The Very Best Quotes From Dr. Taylor Swift’s NYU Graduation Speech
By Grace Wehniainen
Get Even More From Bustle — Sign Up For The Newsletter