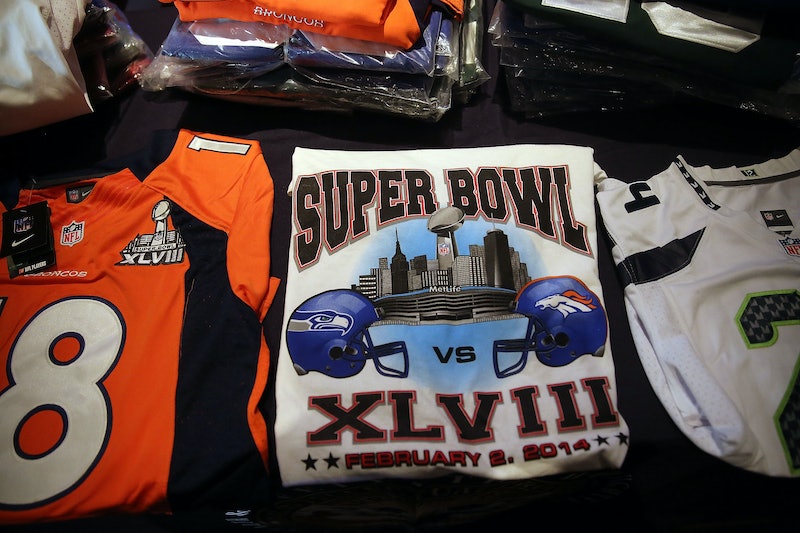 The Super Bowl is on Sunday, and though many of those watching know everything about the game (who's playing, who's not, who's favored, who's not, who's performing during halftime, who's serving concessions at the MetLife stadium), at least a handful of Americans are completely clueless about one thing: What the heck Super Bowl XLVIII stands for. That's right: Despite the fact that we see that shiny silver trophy complete with Roman numerals everywhere — on frat guys' shirts, orange juice cartons, and more — fans have difficulty translating XLVIII's Roman numerals into Arabic numerals.

So what does XLVIII stand for? I'm here to help. X = 10, L = 50, V = five, and I = one. But in this particular case, when the X comes before a number, it subtracts from its total value. So since L is 50, the preceding X takes away 10 of its value, leaving you with 40. Then you add the 5 points for the V and the 3 "I"s and you get a grand total of 48, which is how many total Super Bowls there have been. But how many people actually knew that? We hit the streets to find out.

It turns out most people tend to know what 1-10 is in Roman numerals, but that L really throws people off. (His total guess, cut off by this Instagram video, was 78.)

The woman below knew what each of the numerals meant — she just couldn't add them together, given the tricky X subtraction.

I asked this student, but she confessed her school didn't even have a football team, so she wasn't familiar with anything having to do with the sport (including Roman numerals):

Her total guess was 28, figuring both L and V stood for 5.

This girl had a good, logical guess:

This one did not:

This man knew, but only because he watches football and every station has been "gearing up for Super Bowl 48!"

But my favorite was this man:

He was the only participant to translate the numerals without hesitation. When he learned this, he said, "Well, back in my day, when I was born 100 years ago, we still used those to count." Touché.

So moral of the story? Based on this sampling, which found that only two out of seven people could read Roman numerals, a large number of Americans watching the Broncos face off against the Seahawks this Sunday won't understand what the numbers constantly flashing across the TV screen mean. Oh, and the American school system has failed us all, of course.